The UK Home Office has published the 2017 annual statistics (permalink) showing the number of animal procedures carried out in Great Britain under the Animals (Scientific Procedures) Act, 1986; this covers all vertebrate species (and Cephalopods). In 2017 there were 3.79 million procedures carried out, down 3.7% from 2016 (3.94 million). These numbers do not include figures from Northern Ireland, who count separately; in 2016 they carried out 22,214 procedures.

Overall, 96.8% of animals used in scientific studies were mice, fish, rats or birds. The statistics also reveal that over half of all experiments (50.2%) were the breeding of GM animals which were not used in further experiments – this a similar proportion to the last five years. Overall, 69.2% (over two thirds) of all experiments involved genetically altered animals, this was up from 65% in 2016.

Dogs, cats and primates (which are offered special protections under UK law) together accounted for less than 0.2% of the total (slightly down from previous years). Procedures on non-human primates fell to 2,960, and for dogs fell to 3,847 – the fewest number of procedures in over forty years for both species. While the number of cats rose by eight (to 198), it still remains at a low level by historical standards. 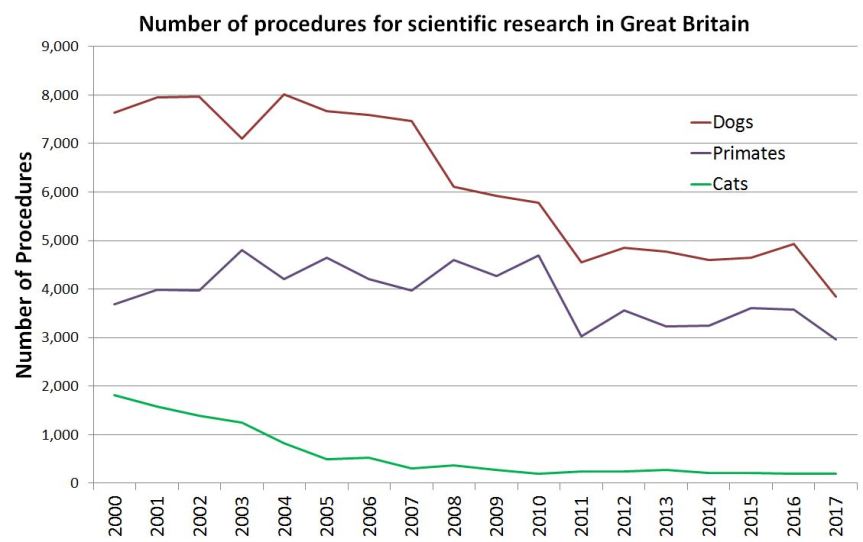 A ban on cosmetic testing on animals (1998) and of using great apes (gorillas, orang-utans and chimpanzees) in research (1986) meant both had zero procedures in 2017. It should be noted that some research may continue on great apes in zoos, however, such research can be observation-based only as “procedures” on great apes are illegal under ASPA.

Retrospective reporting of suffering continues to be split within the official data by experimental procedures and procedures for breeding and maintaining genetically altered animals. We have combined them to get severity for all procedures in 2016 – see definitions below the chart). It shows that 81.8% of procedures are sub-threshold, non-recovery or mild, and involved minimal pain or suffering for the animals. 14.5% of studies were moderate (16% in 2016) and 3.6% were severe (3.9% in 2016). So overall the level of severity has decreased in 2017. Also of note in the severity data is the rising proportion of sub-threshold experiments in the creation/breeding of genetically modified animals from 45% in 2014, to 55% in 2015, to 65% in 2016, and now to 74% in 2017 suggesting improvement in methods.

Severity is categorised as follows (from page 20):

Sub-threshold: When a procedure was authorised under a project licence but did not actually cause suffering above the threshold of regulation, i.e. was less than the level of pain, suffering, distress or lasting harm that is caused by inserting a hypodermic needle according to good veterinary practice.
Non-recovery (under general anaesthesia): When the entire procedure was carried out under general anaesthesia without recovery.
Mild: Any pain or suffering experienced by an animal was, at worst, only slight or transitory and minor so that the animal returns to its normal state within a short period of time.
Moderate: The procedure caused a significant and easily detectable disturbance to an animal’s normal state, but this was not life threatening. Most surgical procedures carried out under general anaesthesia and with good post-operative analgesia (i.e. pain relief) would be classed as moderate.
Severe: The procedure caused a major departure from the animal’s usual state of health and well-being. This would usually include long-term disease processes where assistance with normal activities such as feeding and drinking were required, or where significant deficits in behaviours/activities persist. It includes animals found dead unless an informed decision can be made that the animal did not suffer severely prior to death.

The trend graph shows how the number of animals used in research appears to be flattening out, and possibly falling, after almost two decades of rising numbers. It should be noted that the Home Office reported in 2015 that it believes there were statistical errors in the 2014 report as a result of new counting methodologies, but that this has been ironed out for 2015-2017. The number of animals remains much lower than the 5.5+ million animals used in the 1970s.

The number of procedures will reflect a number of factors including the funding environment, new areas of research, new techniques (which may boost or reduce animal numbers) and more. It remains to be seen if Brexit, which may have an impact on UK science funding and the availability of researchers, will influence the numbers in future years.

Other things to note in the UK statistics:

Speaking of Research congratulate the UK government on continuing to produce the most comprehensive statistics on animal experiments worldwide.

For animal research statistics of countries around the world please see our statistics page.