But they are not perfect.

Turnover is constant, leading to a lack of continuity and fluctuating ability and expertise levels. In addition – as is the case with all other professions – skill development takes time. A student-journalist doesn’t learn how to become a thorough and balanced reporter overnight.  It’s a position that requires a healthy level of skepticism and also the recognition that at times, some parties may attempt to influence your reporting to overly favor their side of the issue.

Student reporting is not an easy job. Animal activists know this and at times, they attempt to take advantage of the situation.

This week, Louisiana State University scientist Christine Lattin learned why student newspapers are a favorite target of animal rights groups when the LSU student newspaper – The Reveille – covered her research and also PETA’s opposition to it.

Below is our brief analysis of the article.

The first glaring issue is the headline:

It’s hard to believe that a news outlet is approaching a story in a fair and balanced way when the headline blatantly shares only one viewpoint…and a highly negative one at that.

Following the headline, here’s how the story begins:

An LSU science professor is under fire from PETA for experiments that have resulted in “tormenting and killing” hundreds of house sparrows.

This is a repeat of the very same one-sided language used in the headline.

Biological sciences professor Christine Lattin caught PETA’s attention several years ago when they discovered she had been placing trapping nets near bird feeders to study how stressful environments affect house sparrows. The organization said she punches holes into their legs, blasts loud music in their ears and places them into a cart to shake them.

Of course, some of the accusations here defy logic. Punching holes in bird’s legs? Blasting loud music in bird’s ears (using tiny headphones?)  PETA regularly “interprets” research for their audience by making  ludicrous claims such as these. For those who are interested in learning the facts about Dr. Lattin’s research, we invite you to read this previous Speaking of Research post.

Another example of how PETA misleads Reveille readers is this comment from PETA’s Alka Chandna:

“When animals are exposed [to] diets with a really, really small amount of oil, they are no longer able to mount a normal stress response,” Lattin said. “Stress is something that can be harmful, but it’s also something that can help animals survive and to be able to cope successfully with stressors.”

So, as part of their diet, animals receive a small amount of oil, similar to levels that would be ingested if the animals lived in an environment impacted by an oil spill. Of course, this sounds entirely reasonable and gaining a better understanding of how this all-too-common environmental issue effects animals makes complete sense.

In other words, PETA’s characterization of Lattin’s science is more like science fiction.

Given that PETA’s criticisms often rely on such extreme exaggerations, it creates a situation where well-regarded and well-meaning scientists are placed in the unfair position of defending fictionalized research that bares no resemblance to reality.

In this case, it is particularly problematic because The Reveille’s writers and editors accept PETA’s accusations as factual. The basic structure of the story is this: 1. PETA says an LSU researcher is torturing animals and that her research is useless. 2. The researcher disagrees.

Think about it: The Reveille is LSU’s student newspaper and Christine Lattin is an LSU faculty member. So why would a news outlet allow PETA to be the primary authority in charge of defining the university’s research using highly inaccurate and negative terms?

Given this decision, we should probably not be surprised to learn who is quoted first in the story:

“Animals feel pain, have interests, suffer, and therefore, we should take those facts into consideration whenever we are with them,” said PETA Senior Laboratory Oversight Specialist Alka Chandna. “She’s only answering questions that can give her the ability to publish more papers, maybe get tenure, making her way through academia. If she thinks she’s answering any bigger questions, she’s dead wrong.”

What’s worse about The Reveille’s decision to allow PETA to introduce readers to Dr. Lattin’s research…is that PETA’s expert…is no expert at all. Based on her comments, readers might assume that Ms. Chandna is an animal behavioralist or a veterinarian with years of experience.

However, that assumption is flat out wrong. Ms. Chandna’s credentials can be found on her LinkedIn page: 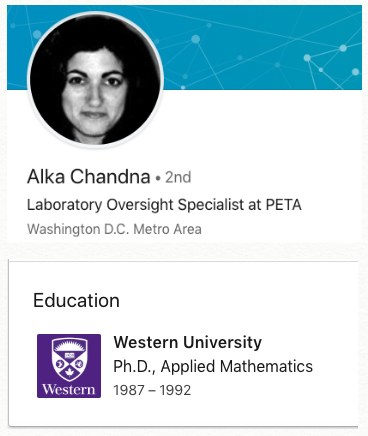 Despite her impressive sounding job title at PETA, Ms. Chandna’s formal training…is in mathematics. Full disclosure: She also worked in software development and taught at a Canadian university before joining PETA 15 years ago. Given Ms. Chandna’s lack of experience and knowledge in the areas of health research and animal science, and her tendency for exaggeration and overstatements, it is fair to ask whether her characterizations and criticisms deserve to be published by a news outlet? Or is It incumbent on more experienced newspaper editors to guide the student reporter to more thoroughly investigate PETA’s claims  – with the help of unbiased experts – to determine if their statements hold water?

We don’t believe the reporter is to blame in this case. The journalist made an effort to get both sides of the story. Also, as we said previously, young reporters have much to learn and PETA is very skilled when it comes to manipulation. But serious damage has been done. Therefore, we hope The Reveille will seek to set the record straight in the near future.