You may have read recently or seen on social media platforms that, “the use of animals in scientific research seems to be declining in the European Union….” and accordingly, that this is due to the “EU tough regulations” that are “designed to protect research animals.”

At first blush, these claims seem reasonable enough. There are, however, a number of factual issues with these claims, as we have outlined previously. Moreover, just reporting total numbers is insufficient towards evaluating EU regulations. More context is necessary. Further, the question of how accurate those numbers are must be addressed, as the report notes shortfalls in data quality.

Firstly, comparison of these data to the previously produced seven reports (1991-2011) is ill-advised because those reports were compiled under Directive 86/609/EEC, when there was little harmonization of guidelines for data collection between EU member states. Additionally, the number of member states in the EU has changed across the seven previous reports, ranging from 10-27 member states, and so the comparison of these data in absolute terms is fallacious.

Secondly, we have to be skeptical about the accuracy of these data given that the report itself states:

“The data quality control revealed shortfalls but the overall assessment showed acceptable quality. Some elements of the new reporting have proven extremely demanding and required extensive efforts by Member States and the Commission. These concern especially the reporting of the severities experienced by animals and the consistency of reporting animal use for the maintenance of genetically altered animals within and between Member States, and over years.”

“General information is presented for the three years, 2015 – 2017. A more detailed analysis, however, uses the most recent and likely most accurate data of 2017.” Emphasis added. 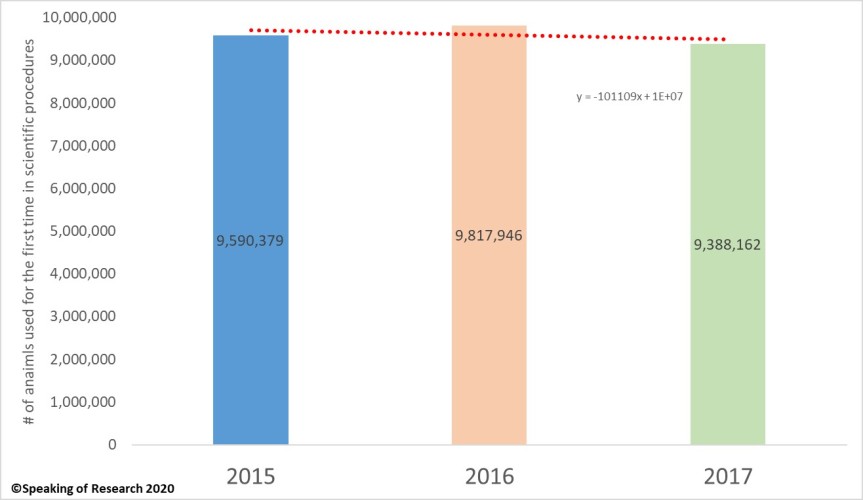 Perhaps in 2018 we will see another increase, similar to what was observed between 2015-2016? More importantly, however, and as we have stated before, simply reporting the numbers ignores the global context and relevant information about changes in animals used in research over time. One such context is that animal research may be continuing, but elsewhere. This would be unsurprising, given that that investment into biomedical research by other countries such as China, far outpaces that of Europe, America and Canada.

While the collection of these kinds of statistical data are undoubtedly useful for some purposes, we encourage all stakeholders to ask questions about the cost and benefit of collecting these large amounts of data. That includes questions such as: What is the public benefit of this particular type of reporting? Does it provide a full picture of why animals are used, and how their welfare is ensured, why changes occur across years, or in different species, or in different countries?

“It is the broadest, most comprehensive approach to collecting and publishing animal statistics in the world,” says Stefan Treue, who heads the German Primate Center in Göttingen. He suggests it is a model that other countries could follow, although he notes that the complex reporting requirements put a high administrative burden on scientists and their organizations.” (Emphasis added)

The actual cost of the reporting system should also be closely examined not only with respect to whether it is the best use of resources, but also whether the system can reliably produce accurate numbers. Rigor and reproducibility are important, even here.

At SR we believe that a key goal of transparency is to provide not only accurate information, but also the meaningful context that can inform serious consideration and decisions about global science, medical advances, and public benefit. These kinds of statistical data seem to fall short of the goal.