The United Kingdom reports a wealth of information every year on its use of animals in research. Every animal procedure must be categorized according to the overall purpose (and specific disease area or regulatory purpose if relevant), the genetic status of the animals and the severity of the procedure. Great Britain (England, Scotland and Wales) conducts approximately 99.5% of procedures, which are regulated by and reported by the UK Home Office. Northern Ireland conducts the remaining 0.5% which is regulated and reported by the Department of Health in Northern Ireland.

Every year the Home Office releases the statistics on animal research in Great Britain (Northern Ireland released separately) for the preceding year. In 2019, the total number of procedures on animals was 3.40 million, down 3.4% from the 3.52 million in 2018.

*The total number of animals excludes those animals first used in a previous year, which underwent a procedure in the current year, in order to prevent double counting of animals between years.

The last few years have seen the number of Genetically Altered animals (mainly GA mice) being bred rising as a proportion of all studies; this accounts for 49.1% of all procedures (in 2019). Other common uses included basic research (28.9%), regulatory purposes (12.9%) and translational/applied research (8.2%).

Looking at the species used we can see, mice, rats, birds and fish account for over 96.75% of all procedures on animals in Great Britain. Dogs and cats account for 0.14% and primates account for around 0.11%. Invertebrates such as fruit flies and nematode worms are widely used by researchers but are not covered by the Animals (Scientific Procedures) Act and are thus not included. The only invertebrate included in the statistics are cephalopods, though none have been used in recent years.

The UK statistics include retrospective reporting of suffering. Rather than just submitting licence proposals to the Home Office that include estimated levels of suffering, the researchers now have to report on what was actually seen (using a variety of measures). Unfortunately, the statistics put these in two separate tables (Table 3.1 and 8). We have combined them to get severity for all procedures in 2019 – see definitions on page 20). It shows that 81.4% of procedures are sub-threshold, non-recovery or mild, and involved minimal pain or suffering for the animals. 15.4% of studies were moderate and 3.1% were severe.

It is also important to realize that no animal research or testing was done for:

When we look at the other uses of animals in the UK we see that those killed for medical research (and the huge benefits that go with it) are far outweighed by the numbers of fish and chickens eaten, and even by the number of birds and other wildlife killed by domestic cats.

Finally, it is worth remembering the huge benefits brought about by animal research. Here are some annual figures of treatment used that were developed through animal research. 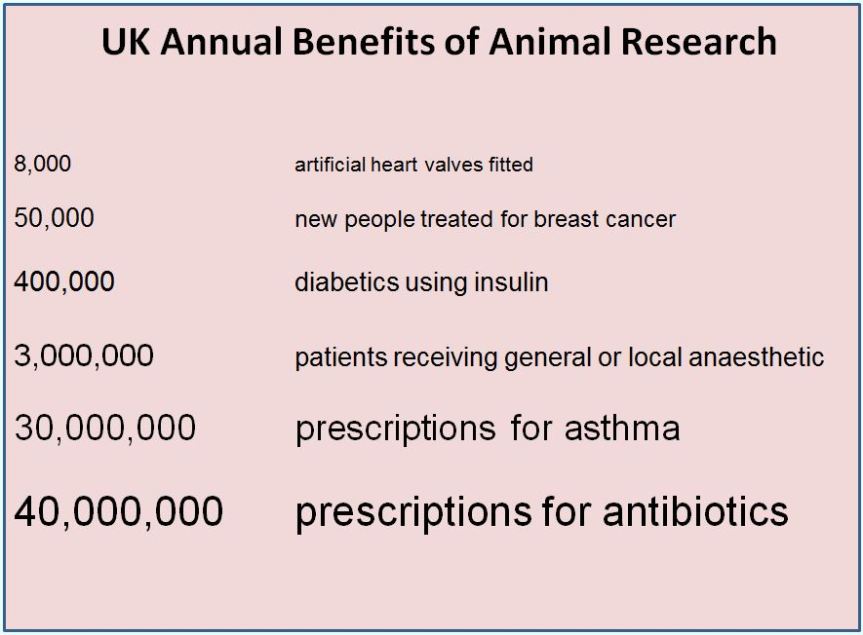 In Northern Ireland, animal research statistics are compiled by the Department of Health, Social Services and Public Safety in Northern Ireland (as opposed to the UK Home Office, as in England, Scotland and Wales).