Animal rights activists may want to start cooling down their engines.

Apparently, by 2050 we can expect the complete elimination of animal use in science.

At least, this is the prediction made by Dr. Andrew Rowan, Chief Scientific Officer of the Humane Society of the United States (HSUS) in a recent article that appeared in The Scientist.

The title of the piece was “Avoiding Animal Testing.  Advances in cell-culture technologies are paving the way to the complete elimination of animals from laboratories”.

The first half of the article focuses on the development and adoption of alternatives to the use of animals in toxicology.  Our public health officials and the FDA have long made the sensible decision to require any company that introduces new chemicals or drugs into the market to provide an initial experimental assessment of their potential toxicity to humans.

This use of animals for such safety screening is typically called animal testing.

Dr. Rowan correctly points out that advances in the development toxicology methods may allow us eventually to relax the regulations that require the use of animals in testing.  But he rapidly moves to insinuate such advances imply that by 2050 we could see the end of animal use in laboratories:

This overall decline in animal use can be attributed to the advent of novel technologies such as improved cell-culture systems and micro-analytic techniques; more sophisticated model systems; improved understanding of signaling and metabolic pathways; and a host of other new methods that allow scientists to answer important questions about the functioning of healthy and diseased tissues without subjecting whole animals to harmful procedures. With a 50 percent decline in animal research since 1975, we are roughly at the halfway point towards the complete elimination of animal research. Thus, we argue that, by 2050, we might finally see the last of animal use in the laboratory, particularly if all stakeholders put their minds to it.

First, the assertion that the total use of animals is systematically declining is not supported by the data.  The slide below, for example, was taken from a recent talk Dr. Rowan gave at the University of Wisconsin.  It shows the total number of animals used has been stable since the mid 80s, with the number of non-genetically modified (Non-GM, faint dashed line) animals decreasing and stabilizing in the 90s (see also data here), while the number of  genetically modified (GM) animals, which are largely mice, has been systematically increasing. 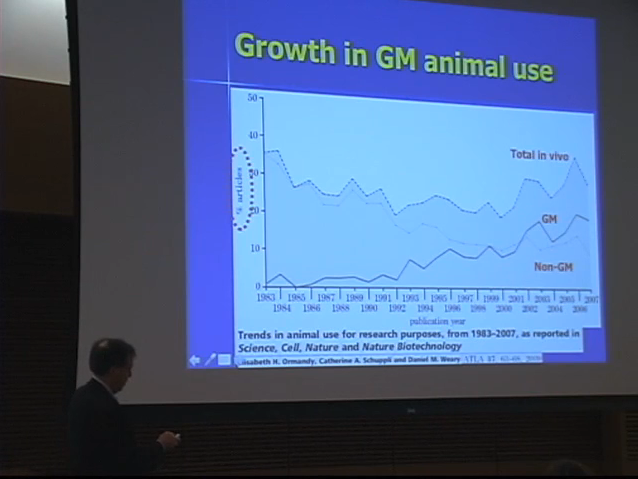 Second, even if correctly asserting that we can expect a diminished need for animals in toxicology testing, Dr. Rowan’s generalization of such trend from a such narrow field to all of biomedical research is groundless and misleading.

Let us be clear, our universities do not engage in animal testing, but in animal research.

Scientists are largely concerned with elucidating the basic mechanisms of biological processes in health and disease.  We want to study how cells in our bodies work, how they communicate, how they develop, how they age and how they die.   We want to understand how the brain, our immune system, and internal organs work and how they fail.  And so on…

Why is it critical we develop such an understanding?

Because without this knowledge there will be no hope to combat disease. Indeed, the mission of the National Institutes of Health (NIH) recognizes this fundamental fact in its opening statement,

NIH’s mission is to seek fundamental knowledge about the nature and behavior of living systems and the application of that knowledge to enhance health, lengthen life and reduce the burdens of illness and disability.

Implicit in such declaration is the acknowledgment that it is basic knowledge that drives advancements in human health and well-being.  Basic knowledge of nature is what drives progress.  This point is critical —   translational or applied research would not exist without basic knowledge as the raw material.  Without knowledge there would be nothing to translate nor apply.

Those that declare an imminent end to the use of animals in science are effectively implying that they envisage all basic knowledge needed will be acquired by a certain date, or that we will have methods that would allow us to proceed with studies non-invasively in human volunteers. Dr. Rowan’s statement that “Advances in cell-culture technologies are paving the way to the complete elimination of animals from laboratories” is nothing short of utter scientific nonsense.

Is it possible for Dr. Rowan to be ignorant of the role of animals in scientific research?  Could he legitimately be confused about the difference between safety testing on one hand and the development of therapies and basic research on the other?

This seems highly unlikely giving his academic credentials and the fact that he has served on IACUCs before.  In fact, another slide from his talk, shows him delineating these different uses of animals, and illustrating that animal testing for human safety accounts for merely ~25% of total animal use. 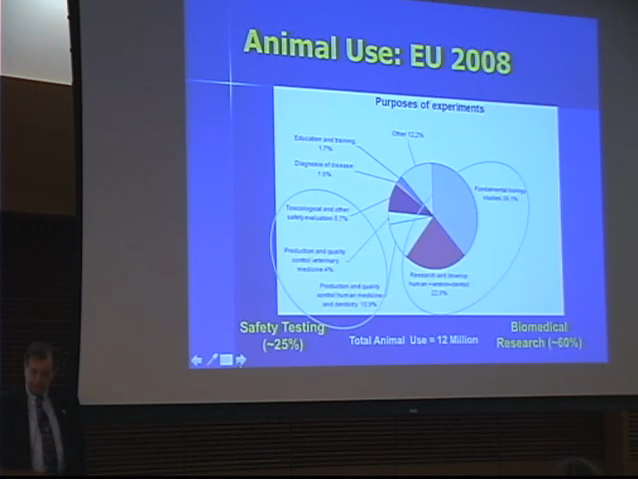 No, Dr. Rowan is not confused at all.  He knows what he is talking about.  This is unfortunate as one can only conclude his article is simply a misguided attempt to deceive the public about the fields in which we might realistically expect science to successfully replace animals in the near future.

And I emphasized science above for a good reason.

As difficult as it is for animal advocates to understand, scientists also believe we will see a day when we can eliminate the use of animals in all animal research.  And the day will arrive because of the hard work, progress and achievements of dedicated scientists, such as this one, and not because of deception of those that want to oppose animal research at all cost.

For HSUS to suggest that all animal research could be eliminated by 2050 is  flatly wrong from a scientific point of view, and utterly irresponsible from a public health perspective.

4 thoughts on “Ignorance or Deception?”