The following guest post is from David Abbott, a scientist at the Wisconsin National Primate Research Center and Professor in the Department of Obstetrics and Gynecology at the University of Wisconsin-Madison.  Professor Abbott recently spoke about the goals of his work and the use of monkeys in research in a public forum series hosted by the university.  The talk was followed by a panel discussion that included a clinician who treats girls with PCOS and Jon Levine,  director of the WNPRC.

I am a scientist leading a biomedical research program investigating the causes of polycystic ovary syndrome (PCOS) in women. I see a balanced consideration at the heart of the argument concerning our humane use of about 200 female rhesus monkeys in experimental procedures over the past 20 years in the service of reducing suffering in approximately 15 million American women who endure PCOS. Our systematic and responsible experimental investigation, which was approved after a thorough ethical evaluation by a University of Wisconsin Institutional Animal Care and Use Committee (IACUC), was the first to conclusively identify developmental origins for this women’s health disorder. It is also the first to provide epigenetic molecular insight into potential mechanisms underlying PCOS that can be targeted by future preventive therapies.

PCOS is one of the most common health disorders affecting women. The PCOS ovary makes too much testosterone and supports increased hair growth on the face and body. The enlarged ovary also grows too many egg-containing follicles, thus providing the enigmatic appearance of the polycystic ovary. PCOS follicles usually fail to mature and frequently fail to release an egg at ovulation, hence the lack of menstrual cycles and infertility associated with the disorder. In addition, PCOS overly contributes to obesity, new cases of type 2 diabetes among young women, gestational diabetes, sleep apnea and metabolic syndrome. All of these increase a woman’s lifetime risk of cardiovascular disease. In the words of leading clinical experts in the field:

It has become increasingly clear over the past several years that PCOS is a complex genetic disease resulting from the interaction of susceptibility genes and environmental factors. The insight that prenatal exposure to androgens can reproduce most of the features of the human syndrome in primates has led to a paradigm shift in concepts about the pathogenesis of the disorder.”1

Our PCOS-like monkeys provide insight into a potential origin for PCOS in women: exposure to too much testosterone during fetal life. This insight cannot be ethically gained from experimentation in humans. The inspiration to explore a fetal origin for PCOS, however, does come from humans. PCOS runs in families. Daughters born to women with PCOS are at increased risk for PCOS. So, I posed the question:  What if excess testosterone production, a hallmark of PCOS and its most heritable trait, is its cause? In other words, could too much testosterone produced by the fetal PCOS ovary reprogram multiple female organ systems as they develop, so that when mature, such widespread organ system dysfunction manifests the abnormalities we know as PCOS? Circumstantial evidence from genetic or tumor anomalies in humans indeed suggests that exposure of fetal girls to excess testosterone, alongside other abnormalities, results in PCOS. Humans, however, cannot ethically be used to test the hypothesis that fetal testosterone exposure, alone, causes PCOS.

A population of female rhesus monkeys housed at the Wisconsin National Primate Research Center at the University of Wisconsin, Madison, held the key to testing this possibility. Between about 1970 and 1985, these otherwise normal female monkeys were exposed to fetal male levels of testosterone during gestation when their mothers were given testosterone conjugate as part of other studies. Independent of this work, I collaborated with an Ob/Gyn specialist, as well as scientists from a variety of biological science disciplines, in a multidisciplinary research approach to examine whether testosterone-exposed female monkey offspring exhibit PCOS traits in adulthood. We proposed controlled and systematic experimental approaches in grant submissions to the National Institutes of Health, who funded this research. 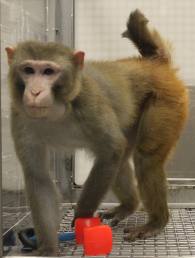 Our work demonstrated that the ovaries of adult female monkeys exposed to testosterone during fetal life produce too much testosterone and, when enlarged, such ovaries grow too many follicles. The testosterone-exposed monkeys also ovulate infrequently, leading to intermittent or absent menstrual cycles. Eggs retrieved from the ovaries of testosterone-exposed monkeys, when fertilized in vitro, show impaired embryonic development. These results from monkey studies led to a human study that demonstrated eggs retrieved from the ovaries of PCOS women had altered gene expression. This was an unappreciated PCOS defect and provided an unexpected mechanism by which PCOS-related abnormalities could be passed from one human generation to the next.

Perhaps the most translatable lessons from the testosterone-exposed monkeys came from examination of their metabolic abnormalities. We found many of the metabolic derangements accompanying PCOS in women, including insulin resistance, impaired insulin response to glucose, type 2 diabetes mellitus (T2DM), hyperlipidemia and increased abdominal fat. As in PCOS women, monkey insulin and glucose impairments were reversed after six months of daily treatment with the insulin sensitizer pioglitazone. The insulin sensitizer approach was so successful that the Primate Center adopted it as the first treatment for all monkeys that developed T2DM naturally since this is known to accompany obesity and aging in monkeys, as well as in humans. Insulin sensitizer treatment of testosterone exposed monkeys also allowed us to normalize their menstrual cycles, demonstrating that insulin is involved in suppressing ovulatory cycles, which also occurs in PCOS women. Thus not only did fetal testosterone exposure create a remarkable mimic of PCOS in monkeys, it emulated a key part of the pathophysiological mechanism found in women with the disorder.

The close replication of PCOS in monkeys prompted examination of what occurs during fetal and infant development before adult PCOS traits emerge, which opens the way to earlier targeting of treatment in humans. We found that testosterone injections given to pregnant monkey mothers actually impaired their ability to regulate blood glucose. In addition, the fatter the monkeys were before they conceived, the more susceptible they were to testosterone diminishing insulin regulation of glucose during pregnancy. As in humans, maternal inability to regulate blood glucose results in increased fetal exposure to glucose and increased fetal and neonatal growth. The infant monkeys previously exposed to testosterone and high glucose as fetuses exhibit high insulin responses to glucose that will likely cause insulin-induced accumulation of fat and muscle and relatively fat offspring beyond their heavier infant weight. Since these infants also have elevated androstenedione levels, reproductive- and metabolic-related antecedents of PCOS in monkeys are pronounced from birth. These findings encourage clinical studies aimed at establishing childhood biomarkers for subsequent adult PCOS, especially since PCOS mothers taking the insulin sensitizer metformin before and during pregnancy give birth to daughters who do not go on to develop ovarian hormonal abnormalities at 2-3 months of age.

More recently, with mapping of the rhesus monkey genome and collection of intra-abdominal (visceral) fat samples from infant and adult monkeys exposed to testosterone as fetuses, we quantified how fetal programming changed the methylation patterns of gene promoter sites, and thus increased or decreased relevant genes expression in a fat depot intimately involved in controlling insulin regulation of glucose. Pathway and network analyses revealed commonalities in changed DNA methylation between infants and adults, implicating altered signaling of transforming growth factor beta (TGF-beta) in determining PCOS-related traits. This is an exceptionally relevant molecular result because a gene variant determining a component of TGF-beta signaling, known as fibrillin 3, has been repeatedly associated with PCOS in women. Fibrillin 3 is also only prominently expressed in human ovaries at a gestational age equivalent to the age at which our monkeys were exposed to testosterone. One aspect of testosterone (and glucose) mediated changes in gene expression in monkeys may therefore provide a molecular mimic of the gene variant associated with PCOS in women. Such molecular mimicry establishes testosterone-exposed monkeys as unparalleled models for establishing preventative therapies targeted at PCOS.

Subsequent testosterone exposure studies on mice, rats and sheep by other scientific teams, undertaken because of the monkey results, emulate some or most of our original findings. While non-primate studies consolidated fetal testosterone exposure as an origin for PCOS traits in adulthood, they also caused fetal growth restriction, something that is not common in women with PCOS and is not found in testosterone exposed monkeys. Fetal growth restriction is caused by diminished placental supply of nutrients and leads to adult metabolic disease distinct from that of PCOS. Testosterone exposed monkeys are thus the most human-like animal model for PCOS and provide an established biological platform for therapy directed studies.

The insight thus gained into developmental programming of PCOS in approximately 15 million women in the US from over 20 years of humane, controlled and systematic use of about 200 rhesus monkeys is substantial and unique. Monkeys are such close human relatives that they best enable translation of research findings into human application. In our case, they permit exploration of insulin regulating therapies during pregnancy, such as metformin, as potential preventative therapies and they permit evaluation of consequences for offspring development, as monkey gestation and infant and juvenile development closely emulate the human. The quality of the scientific findings yielded by our studies was made possible by the highest standards of veterinary care, animal husbandry, nutrition, social housing and environmental enrichment that permit our monkeys healthy and well-cared for lives. Our research program is a humane and considered use of monkeys in the service of reduced suffering in women.