This article was originally posted on 11 June 2014. On 4 June 2015 we received representation from CFI asking us to reconsider some of the wording. Having considered all of their comments and reflected upon the article, we have amended these and reposted them as they appear below.

For the second time this year the British Union for the Abolition of Vivisection (BUAV; now called Cruelty Free International) infiltrated an animal research facility and sent footage to a British tabloid. For a second time this year, the BUAV has shown us nothing the public could not find out for themselves. No unnecessary suffering. No misbegotten science.

Let us also make a quick distinction between whistleblowing and infiltration. Whistleblowing is a standard lab policy in all UK labs whereby anyone who sees anything they find concerning (particularly relating to animal welfare) can – and should – report it to one of a number of different people up the chain of leadership. Infiltration is a tactic of sending someone into a lab with the express intention of filming as much as they can to create the most dramatic short video possible. Those involved are often double paid by both the organisation they infiltrate and the animal rights group who sent them there. Importantly, infiltrators are actively trying to find shocking video moments. Furthermore, whereas whistleblowers should report animal welfare issues quickly, infiltrators will tend to sit on any animal welfare issues they see until they have finished working at an institution – leading to unnecessary animal suffering.

Cambridge University research into Huntington’s and Batten disease
Last weekend, the Mirror on Sunday ran a story alleging sheep were “being left to suffer in pain and misery for pointless experiments” at Cambridge University following a BUAV infiltration. It should be noted that we have given examples before of the Daily Mirror playing fast and loose with the truth of animal research. Thankfully the Mirror on Sunday provided more balance than its Daily sister-publication usually does by including the perspective of both a patient and a scientist.

The BUAV took hours and hours of footage provided by their undercover infiltrator and edited it down to 4 mins 21 of what we must assume they considered the “worst” footage. In it we see several sheep exhibiting the symptoms of Batten’s disease. The BUAV also make several allegations about animal welfare, none of which seem to be corroborated by the video footage released so far. 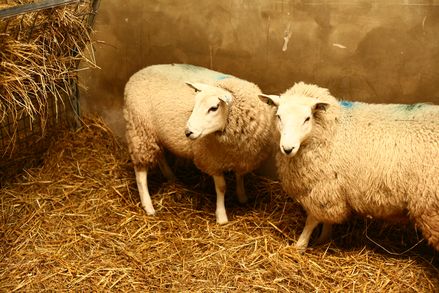 We see sheep, group housed in large hay-covered pens, clearly well cared for, and behaving calmly when examined by scientists and veterinarians. It is a mark of the BUAV’s approach that they make a great play on the term “crush cage”, when in fact these cages (known as squeeze chutes in the US) are widely used by farmers to hold an animal still to minimise the risk of injury to both the animal and the operator while work – veterinary care or routine husbandry – on the animal is performed. It is worth considering that the UK eats around 1 million sheep and lambs per month.

While this may be disturbing, the reality of Batten’s disease in humans, and its effects on a patient’s loved ones, are far, far crueller.

The University of Cambridge has strongly defended this research, pointing out that:

The researchers have been testing a sheep model of Huntington’s Disease developed by collaborators in New Zealand and Australia and studying a line of sheep that carries a natural mutation for Batten’s Disease.

Whilst every attempt is made to keep distress to a minimum, the very nature of these diseases means that the animals will show symptoms related to damage of the nervous system similar to those seen in humans.

A treatment that could slow the disease process once it has started would be a major advance, but the ideal treatment would prevent the onset of symptoms.

MSD testing and developing vaccines for pets
In March, the Sunday Express (another tabloid not known for its science journalism…to put it mildly) ran a story purporting to show “horrific photographs and video footage showing puppies panicking as they were injected with needles before being dissected” that had been taken by “a brave undercover investigator who worked at the centre for eight months” while “also working with the BUAV throughout that time”. The research at MSD Animal Health was for testing and developing veterinary vaccines. This time the BUAV edited eight months recording into six minutes of footage that showed …. nothing. No, not nothing, it showed researchers and lab technicians conducting research with animal welfare heavy on the list of priorities. The animals were healthy, well socialised, group housed and cared for by researchers who stroked and chatted to the animals.

The video did include the dissection of a dead animal. This doesn’t look nice. Dissection rarely does. However, let us remember that the animal had been humanely killed and its welfare was not influenced by the science being carried out after it died.

The BUAV spend around 10% of their £1.7m (2013; $2.9m) – £2.0m (2011/12; $3.4m) income on investigations. Half of this is on staffing, and half is on “Other Costs”. Given the sums involved it is not unreasonable to assume that the BUAV has lab technicians it has placed in labs on its payroll (note the Sunday Express described the infiltrator at MSD as “working ” with the BUAV). These are not casual whistleblowers, but people who are working at animal research facilities with the express intention of creating newsworthy videotapes.

One has to wonder how many BUAV infiltrators are in labs around the UK. Moreover, one wonders, how many BUAV infiltration videos were never publicised due to the lack of newsworthy footage (even after clever editing)? Each of the above infiltrations involved hundreds of hours of footage being taken of which 5 minutes was considered dramatic enough for watching. Even those five minutes lack any real substance.

To the BUAV – Prove it!
To the BUAV we ask you for the openness and transparency you accuse the research community of lacking. Show us the rest of the footage. Show us the hours and hours of footage that never made it onto your final mix tapes.
Will we find hours of shocking footage? Or will we find hours and hours of individuals working hard, caring for animals, and conducting research in a manner which provided high standards of animal welfare. It’s for you to prove.