Anyone who regularly follows the news, likely spotted some of the headlines that surfaced during a several months-long battle over a USDA research project involving cats.

Countless stories like these, focused on a series of studies taking place within the U.S. Department of Agriculture’s Agricultural Research Service.

Throughout much of the news coverage, federal scientists were essentially portrayed as cat-killing monsters. But a little more research demonstrates otherwise.

The highly-regarded scientists were investigating a common parasite called Toxoplasma gondii, which poses a major health threat to a significant segment of the population. It’s estimated that 25 percent of Americans over the age of 12 are already infected and we don’t even know it. But that does not mean the parasite is harmless. Far from it. People with compromised immune systems, such as the elderly, pregnant women and their unborn children, and those with cancer are at risk. If they ingest the parasite, they can develop a severe illness called Toxoplasmosis. The disease is the world’s leading infectious cause of blindness. Also, approximately 190,000 babies are born with Toxoplasmosis-linked defects every year.

But why study cats? Because felines are the only animals that pass oocytes, the environmentally resistant stage of the Toxoplasma gondii parasite. So in other words, if you want to study Toxoplasmosis, you pretty much have no choice but to involve cats in the research process. The parasite doesn’t hurt cats. However, it is a persistent infection, meaning that cats can shed dangerous oocytes for the rest of their lives once they become carriers. Because this is the case, the USDA rightly determined that felines involved in the research needed to be humanely euthanized once studies were completed.

White Coat Waste Project, a group that wants to end all federal funding for animal studies despite the fact that the move would severely damage public health, has campaigned for several months against the research. We’ve  written about them in the past. White Coat Waste has accused the USDA of running a “ kitten slaughterhouse. ” More recently, they claimed USDA researchers forced “kitten cannibalism” while studying the transmission of the disease from parasites in cat and dog meat, which is sold in markets in certain countries.

After months of ghoulish claims and headlines, criticisms leveled by several lawmakers, and proposed federal legislation to end the studies, the USDA finally relented. Last week it was announced that the Agricultural Research Service studies would end immediately and the ARS would not undertake any additional projects involving cats.

News outlets carried the announcement using the same old White Coat Waste-provided script. At times, many media members even failed to attribute rhetoric like “kitten cannibalism,” stating the claims as if they were independently confirmed facts. 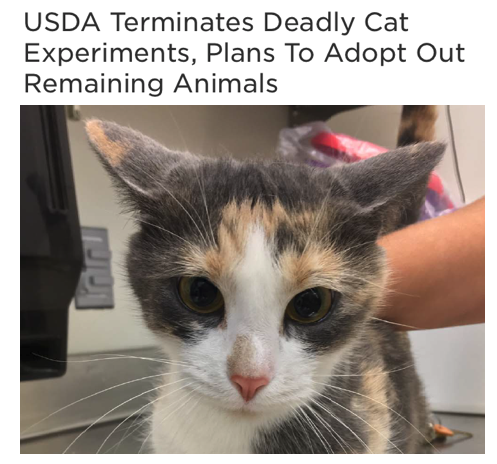 A Google search will reveal plenty of additional stories about the USDA’s decision to end the studies. And for the most part, they pretty much all lack important details and context. However, the absence of balance is not the news media’s fault entirely. For many months, the USDA has only defended the studies on occasion, often providing only general statements. To our knowledge, some of the most outrageous activist phrases – like the cat cannibalism claims – never received any response from the agency.

However, yesterday, we were pleased to see this story in Science Magazine by Meredith Wadman, who actually took the time to track down scientists who study Toxoplasmosis and see what they had to say.

One, Robert Yolken M.D., of Johns Hopkins University deemed the USDA’s now defunct Toxoplasmosis unit “an incredible resource.” He called the labs closure “a loss for Toxoplasma research in the U.S. and around the world.”

Others believe the decision could actually lead to an increase in the number of cat studies. This could end up being the case because the USDA served as a resource that provided oocytes for research in several collaborating labs.

You can read the full article in Science Magazine here. We need more stories like these and we hope this article will inspire others.

Looking back at the past few months, this was a case where scientific voices and reason were sadly drowned out by anti-animal research rhetoric. It’s also a reminder of the dangers of failing to vigorously defend critical studies and allowing outrageous claims to stand. More researchers and research organizations need to stand up for their science. They also need to help the public recognize the importance of species-specific studies in chimps, cats and dogs and the dangers of using animal models that poorly match the disease, condition or system being studied.