For more information about the discovery of insulin we recommend you read our more recent post: Animal research and diabetes: Now the truth must be told Part 1 and Part 2

A mere one hundred years ago, when people were diagnosed with diabetes, they were handed down a death sentence.  There was no treatment for the disease.  Children would become skeletons and die of severe weight loss in front of their families. 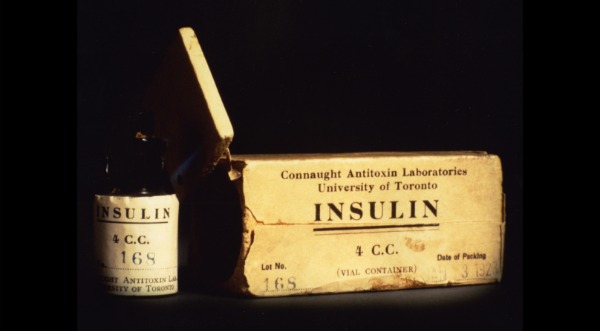 The first breakthrough in the search for a treatment came in 1879 with the discovery by Von Mering and Minkowski that removing the pancreas in dogs led them to develop all the symptoms of diabetes and die shortly after.  They proposed that the pancreas was involved in the metabolism of sugars.

In 1921, Banting and Best replicated this earlier result and took it a step further – working under the supervision of Macleod they showed that they could restore diabetic dogs to their normal state by injections of an extract of produced by the Islets of Langerhans obtained from healthy dogs.

With this result in a dog model of diabetes they subsequently recruited Dr. Collip, a biochemist, they who helped them extract a reasonably pure formula of insulin from the pancreas of cattle. This painstaking process of refinement of the technique for extracting insulin required many tests in rabbits in order to evaluate the potency and safety of the insulin preparations.

In January, 1922, the first human patient, a diabetic teenager named Leonard Thompson, became the first person to receive an injection of insulin. The improvement was so astonishing, nearly miraculous, that the news about this medical breakthrough traveled the world within days.

The University of Toronto gave pharmaceutical companies license to produce insulin free of royalties (would this count as an argument against the notion that universities merely seeking financial gain for their work?).  In early 1923, just one year after the first test injection, insulin became widely available and has saved countless human lives since.  Banting and Macleod received the Nobel Prize in Medicine for their work.

This is only one of multiple stories about how animal research has benefited mankind.  This is research that will benefit you, your children, and all future generations.  An honest discussion of the use of animals in scientific research must acknowledge these facts, how we arrived at them, and recognize that despite the difficult ethical decision to use dogs in the discovery of insulin, today millions of humans are alive thank to the work of scientists engaged in biomedical research.