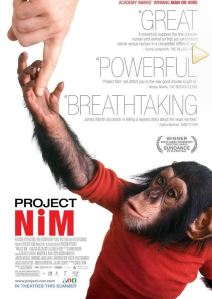 A guest post today is courtesy of Mark Seidenberg addresses the errors of Peter Singer in his recent piece in the New York Review of Books. Mark was a graduate student at Columbia during the research on Nim Chimpsky, a chimpanzee which scientists attempted to teach sign language to. This piece is the second time we have looked at this issue, after our recent guest post by Herbert Terrace, who was the director of the project at Columbia University. This article has been reposted, with permission from its author, from the Language Log Blog.

Nim Chimpsky and I met when I was a graduate student at Columbia. “Project Nim” is an excellent documentary, a deeply sad story leavened with humor and astonishment at the behavior of the personalities involved . The parts of the movie that cover events I observed—the period when Nim lived at the Delafield Mansion in Riverdale NY and was driven down to Columbia for teaching—was accurate as far as it went. It’s a documentary, not a detailed record of what happened, and it is stronger on Nim’s personal history and the foibles of his human caretakers (and I use the term loosely) than on the science.

I was preparing to write a commentary on the movie and the project, but then Peter Singer’s piece appeared in the New York Review of Books (“The troubled life of Nim Chimpsky“, 8/18/2011). Singer is the Princeton philosopher famous for “Animal Liberation” and other influential, controversial books. His blog post about Nim got many facts wrong and I was moved to write a short response. It might be of interest to Language Log readers.

Full disclosure: I did not work directly on the Nim project or co-author any research papers resulting from the project. I was a graduate student in the psychology department working with Tom Bever (originally a co-PI on the project; he came up with the name); I also was a co-author with Terrace and Bever and another graduate student on a study of rule-learning (!) in pigeons (!!). My first journal article was a critical review of the studies of signing apes by the Gardners and others, co-authored with Laura Petitto (“Signing behavior in apes: A critical review“, Cognition 7(4) 1979).  I’ve contributed to some other articles and book chapters on related topics, such as Laura Petitto and Mark Seidenberg, “On the evidence for linguistic abilities in signing apes“, Brain and Language 8(2) 1979; Mark Seidenberg and Laura Petitto, “Ape Signing: Problems of Method and Interpretation“, Annals of the New York Academy of Sciences, 1981; and Mark Seidenberg and Laura Petitto,  “Communication, Symbolic Communication, and Language“, Journal of Experimental Psychology (General), 116(3) 1987.

Nim Chimpsky’s story is tragic and the “Project Nim” documentary effectively portrays the vanity, foolishness, and gross insensitivity of many of the human participants. Peter Singer is correct that the movie does not provide much information about the science, but his own attempt to fill this gap is ill-informed and incorrect in many details.

On Singer’s telling of the story, the Nim study was superfluous because other research had already settled the major issues. The Hayes’ earnest, laborious and ultimately pathetic attempt to teach a chimpanzee spoken language established the futility of that approach. Their study suggested to many that non-human primates might exhibit their latent linguistic abilities if given an alternative, non-vocal means of expression. This hypothesis was not a frivolous one (even if it turned out to be wrong). Singer approvingly mentions subsequent research by Beatrix and Allen Gardner and their graduate student Roger Fouts; Penny Patterson, longtime companion of Koko the gorilla; Sue Savage-Rumgaugh, and others as establishing the linguistic capacities of apes using gestural signs or keyboards instead of speech. Singer believes that these studies rendered the Nim study unnecessary, and that Terrace “raised the bar” for what counts as language because he found such results too threatening to his own views.

Little of this is consistent with what I observed as a graduate student at Columbia during the Nim project or what I found from close analyses of the ape language studies of the era. The apes in these studies acquired a variety of behaviors. The difficult issues concerned the bases of their behavior, how it did and did not relate to human language, and how one could tell. Singer shows no interest in these essential questions. The positive results that he approvingly cites were the result of applying the most generous possible interpretations to the apes’ behavior. Deciding what Washoe or Koko meant when they signed “banana” was difficult; researchers relied on a discredited method called “rich interpretation”: assume that the ape possesses whatever knowledge a child possesses in using the word. Of course, the basic challenge was to determine whether in fact the ape and child do possess the same knowledge, or how they differed. Other interpretations of the behavior—for example, that it was more like tool use—were not investigated.

Singer is far too receptive to these overgenerous accounts of ape language, which were challenged by people, like me, who had no personal investment in particular outcomes. The Gardners’ research with Washoe also ended when research funding was withdrawn because the science was not credible. Roger Fouts inherited Washoe, maintaining close contact with her and other chimpanzees in his lab, eventually describing his impressions and experiences in a book but conducting no systematic research. When challenged about her fantastical interpretations of Koko’s lugubrious signing, Patterson asserted that, having lived with Koko for many years, only she could properly interpret her language. The Koko “research” was conducted outside the boundaries of organized science: supported by a private foundation rather than research agencies; reported in People magazine but not the peer-reviewed literature. The myth that these animals could talk rests on anecdotes about creative utterances such as the “candy fruit” example that Singer repeats. (Singer conspicuously errs in stating that Washoe learned American Sign Language. She did not. The Gardners used signs loosely adapted from ASL, in English word order.) Examples like “candy fruit” and “water bird” are open to competing interpretations, but, like the filmed snippets of Koko and her kitty or Washoe supposedly teaching sign language to an offspring, they seem convincing to naïve observers, with the assistance of the trainer’s running commentary. Singer is not naïve, and his credulous reliance on this “evidence” is discomfiting.

In short, the bar was indeed raised because the data from these studies were limited and the researchers’ observations and interpretations unreliable, not because the findings were objectionable.

Terrace believed that Nim would genuinely learn to sign because he would conduct a better study. The initial enthusiasm about Nim’s progress arose from this expectation, from the fact that Nim was learning signs rapidly, and from the fact that it would take a few years of data collection and analysis to determine what he was doing. Nim’s teachers (like Laura Petitto) and observers (like myself) communicated to Terrace that the emerging story was not about a breakthrough in animal communication but rather how drastically his behavior differed from children’s. Terrace eventually concluded that the limitation was at the level of combining signs into sentences. In several articles I argued that the limitation was more basic: did any of the “linguistic apes” actually understand that a word (or sign or lexigram) such as “banana” designates a category of objects? That signing “banana” is not merely a way to obtain a banana but is the name for objects with certain properties? The animal could be highly intelligent and communicative and yet still lack knowledge of the concept of “name”, and other foundational elements of language.

Nim’s treatment was shameful. The placing of research and personal interests ahead of the well-being of the individual is reminiscent of the nearly contemporaneous study of Genie, the abused, isolated child who was the focus of another poorly-conceived study with a heart-rending outcome. The Nim study did take place, however, and it is important to understand the results that were obtained. They in no way justify his treatment; nor do they justify Singer’s distorted retelling of the events of the era.

2 thoughts on “Singer Slips Up Over Science of Signs”