At 3pm the organisers of Pro-Test Italia arrived outside the Italian parliament building in Rome. Banners were unfurled, and balloons were blown up in preparation of the many scientists and students who would be attending the second ever Pro-Test Italia demonstration.

By 3.30pm, around 500 people had gathered to show their support for lifesaving animal research, and to reject the activities of animal rights extremists, who have been damaging research in Italy. 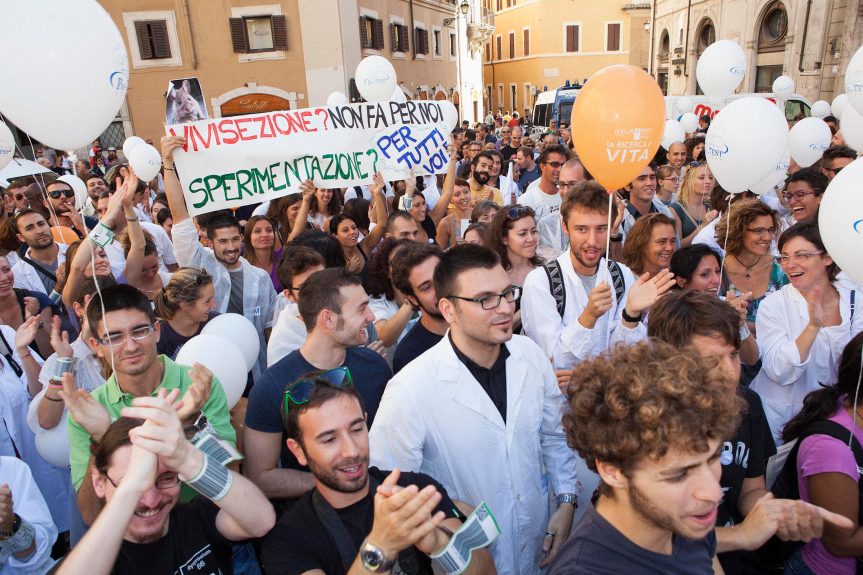 The speaker list included politicians from almost every major political party including:

It was great to see people cheering for all politicians, whether they  were from a political party people supported or not. The key fact was that all these politicians were taking the time to make a stand in defence of research.

Further speeches were made by individuals who had previously spoken at the first Pro-Test Italia rally, including Dr Alessandro Papale, Dr Nadia Malavasi and Dr Giuliano Grignaschi. Once again, these speakers were able to rile up the crowd with their powerful messages of science.

There were also many new faces making an appearance to explain the importance of animal research to medical progress.

The event was closed by Daria Giovannoni, President of Pro-Test Italia, who appealed to the Health Minister, Beatrice Lorenzin, saying that we cannot currently continue medical research without animals. The crowd then released their balloons all at once to symbolise what would happen to research if the new laws stands – it would simply float away to other countries (some of whom have lower standards of animal welfare).

Once again Pro-Test Italia made their voice heard, as shown by their front page coverage in La Stampa, and we wish them the best of luck in changing the tide of the animal research debate in Italy.