The Anti-Vivisection Coalition (AVC), formed in August 2013, has been getting some press recently, campaigning against medical research at Cambridge University and Newcastle University. But in fact the “coalition” is little more than a one-man operation run by Luke Steele, twice imprisoned for attacks on laboratories and harassment and intimidation of lab workers. 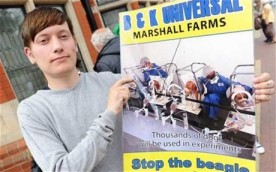 Steele began his activist career going to demonstrations with his parents. He was involved in his first anti-vivisection organisation by the tender age of 13.

In October 2008, aged 18, he was arrested near rabbit breeder Highgate Farm, which had previously been raided by the Animal Liberation Front (ALF). Steele pleaded guilty to “conspiracy to interfere with a contractual relationship, so as to harm an animal research organisation” (“organisation” can also mean individuals involved in research) and in early 2009 convicted under the Serious Organised Crime and Police Act (SOCPA 2005; Section 145); he was sentenced to six months, served on remand. 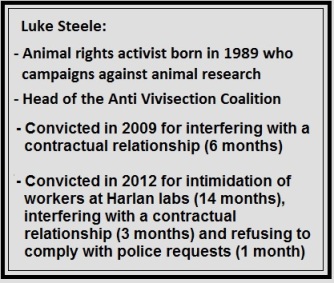 Steele has been spokesman for several small regional organisations in the UK. In 2010 he raised his profile by founding the National Anti-Vivisection Alliance (NAVA), and supported a letter-writing and email campaign to stop ferry companies from transporting animals for research into the UK. This campaign was ultimately successful with some newspapers crediting Steele and his organisation with forcing the ferries to capitulate.

NAVA did not have it all their own way in 2010, and were accused by a local journalist of being “economical with the truth” in a blistering article in the Leicester Mercury about the campaign NAVA set up to stop the building of a new animal research laboratory in Leicester. This article shows how far NAVA are willing to bend the truth to achieve their objectives, but also how the robust and forthright response by the University of Leicester was successful in exposing their dishonesty. Following the publication of the article the campaign against the new lab quickly collapsed. The Universities response was a model of good public engagement, and in 2012 the new lab was opened in a public ceremony attended by local dignitaries and covered by the BBC.

In January 2012 Steele was arrested again, and on 27th July, 2012 he was convicted on 3 charges: “Intimidation of persons” (14 months under SOCPA Section 146), “Interference with a contractual relationship” (3 months under SOCPA Section 145) and “Failure to comply” (1 month under Regulatory of Investigatory Powers Act 2000 Section 53 for refusing to give police his computer password). This resulted in a total sentence of 18 months in jail for “harassing staff at Harlan’s laboratories“. Staff on their way to work at the lab, which houses rats and mice, were routinely subjected to harassment and intimidation by Steele and his cohorts, as reported in The Guardian:

… “When you arrived in the morning, you would have to queue for up to five minutes to get through the gates. Their loudhailers were deafening. They would scream at you that you were a puppy killer and would bang on your car. It was horrible. I was left shaking for hours afterwards.”

A male colleague was equally affected: “It is part of their methodology to equate animal work with paedophilia. If they find out your name, you will appear on their website as a paedophile. It is disgusting.” Another Harlan worker found out that his neighbours had all been sent notes claiming that he was a rapist.

Steele was released on October 12th, 2012 having served 182 days including time on remand. He also received a three-year Anti-Social Behaviour Order (ASBO) which, among other things, prevents him protesting outside the facilities of certain organisations.

Ironically, Steele’s prison sentences appear to have brought him some cachet in the inverted morality of the animal rights movement, and he is adept at seeking out publicity. A demonstration outside the National Institute for Biological Standards and Control (NIBSC) attracted over 50 protesters and featured demonstrators in red boiler suits and carrying flaming torches – suggesting that Steele is also becoming an effective fundraiser. Steele has borrowed his imagery from his European counterparts at the with Coalition Anti Vivisection (CAV) in Belgium and Anti Dierproeven Coalitie (ADC) in the Netherlands.

However, it seems he does not stick with one campaign for long, preferring to flit from spotlight to spotlight. Steele has made over 100 Freedom of Information requests to universities and other institutions in the UK, looking for information he can turn into a media release. As with other activist groups, AVC’s statements and news releases seem designed to make the organization seem larger and more substantial than it is.

It’s a pattern we see again and again with animal rights extremists — noise and virulence mask a slim base of support, and need to be firmly challenged.

Addendum: This post has been updated in order to provide more detailed information on Luke Steele’s criminal convictions

Addendum: In June 2014, the AVC announced that Luke Steele was no longer a part of the group. In the months prior, he had been demoted from “Head of the AVC” to its “Director of Campaigns”. He had also been increasingly replaced as spokesman by Cambridge-based activist, Sophie Kennerley.