It’s January, and across the country millions of people have promised themselves that they will eat less, loose weight and become healthier. But why do some people eat more than others? No matter what they try there seems to be no way to stop their overeating. Public education is a powerful tool to combat some of these issues but what happens when it turns into an addiction? It is challenging to provide accurate information when food addiction is a little studied field. In an effort to answer these questions scientists can use laboratory rodents to explore neurobiological mechanisms involved in relapse to drug-seeking behavior, comorbid mood and substance dependence disorders, as well as perseverative reward seeking. These complex answers cannot be solely obtained though human patients because the physiological and psychological mechanisms that influence food addiction are not fully understood.

AnneMare Levy is a PhD student and Francesco Leri is an Associate Professor of Neuroscience and Applied Cognitive Science in the Department of Psychology at the University of Guelph. In the article below these scientists explain how and why the development of a new animal model to understand the addictive properties of some foods is necessary and how its use can begin to answer some of these questions. They believe that through studying rats their findings could lead to novel pharmacological interventions for obese individuals that could help them selectively reduce intake of unhealthy foods.

The views expressed below are that of the authors alone and do not necessarily reflect the views of her employer or institution.

Overconsumption of foods high in sugars and saturated fats is an important contributing factor to the modern epidemic of overweight and obesity1, which are leading causes of metabolic disorders and cardiovascular diseases2. It is therefore important to understand why patterns of excessive food intake develop and persist despite the negative health consequences. Considerable evidence supports the hypothesis that, for some people, addiction to food may motivate these behaviours3-4. In fact, behavioural and neurobiological similarities between obesity and drug dependence support the “food addiction” hypothesis5-8 and studies in both humans and laboratory animals have identified a variety of biological and behavioural indicators of “food addiction”9-12.

The food addiction hypothesis suggests that similar to drugs of abuse, particular foods should reinforce behaviours that lead to their consumption. Therefore, to assess the addictive potential of such foods, we adapted procedures commonly used for studying the reinforcing properties of drugs of abuse (i.e. operant intravenous drug self-administration) to the investigation of operant self-administration of sweet solutions delivered directly into the mouth of rats. To this end, an intraoral cannula was surgically implanted13 into the cheek of rats and the animals were subsequently trained to press a lever to voluntarily receive a test solution directly into their mouth; hence the term intraoral self-administration. The sweet solution selected for testing was high fructose corn syrup (HFCS) because, although controversial14, there is evidence that HFCS may be linked to the modern epidemic of obesity15. 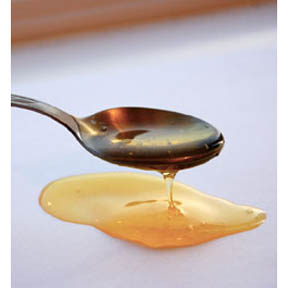 The disadvantage of requiring minor surgery to employ this procedure is offset by several advantages that make intraoral self-administration in rats optimal for studying the reinforcing properties of sweet solutions. First, an operant response (i.e., pressing a lever) is required to obtain an infusion and therefore it is possible to modify the schedule regulating the relationship between response requirement and delivery of intraoral infusions. Hence, by employing a progressive ratio (PR) schedule16, whereby more lever presses are required to get more sweet solution, it is possible to assess how much an animal “wants”17 the next infusion and by employing a continuous schedule of reinforcement, whereby each lever response is reinforced, it is possible to measure total intake, escalation of intake, and the development of bingeing behaviour.  Second, intraoral self-administration allows testing of any concentration and any volume of any water-soluble food additive. The importance of controlling and manipulating concentration/volume ratios is mandatory in experiments where intake can be modulated both by the caloric value of a solution (i.e., nutrient-specific satiety) and by how much of that solution can be consumed within a given period of time (i.e., fullness)18. Third, intraoral self-administration shortens the delay between the operant response and the delivery of the primary reinforcer, a factor that plays an important role in the acquisition and maintenance of operant behaviour19-21. Finally, this procedure allows for the delivery of passive intraoral infusions of controlled quantities of the test solution.  This makes it possible to measure orofacial responses of “liking” (objective hedonic reaction such as tongue protrusions)22 as well as administer priming infusions23 of the test solution prior to tests of reinstatement of sweet-seeking behaviour.

The objective of this study was to characterize HFCS self-administration behaviour in laboratory rats. It was important to establish a reliable animal model of self-administration because it will allow future studies to identify and manipulate the neurobiological substrates that are responsible for the escalation and maintenance of excessive food intake. Moreover, using this animal model, the rats will be able to self-administer solutions for extended periods of time (i.e. months) to establish how sweeteners, such as HFCS, may contribute to the development of metabolic disorders.  For all experiments, rats were surgically implanted with an intraoral cannula while under an anaesthetic. Post-operative care included administering analgesic, daily flushing of the cannula with an anti-bacterial solution as well as closely monitoring weight gain and food intake. Following recovery, rats received one 3-hour self administration session per day, whereby, rats were placed into a standard operant chamber and trained to lever press to receive intraoral infusions of different concentrations of HFCS (8%, 25%, and 50%) on either continuous or PR schedules of reinforcement, as previously described.

It was further noted that total intake of 25% HFCS escalated over three weeks of testing, possibly reflecting the development of “bingeing” behaviour9,13. In fact, after a week of self-administration, rats displayed a clear period of elevated intake during the initial 90 minutes of each self-administration session and this “loading” increased in magnitude over the weeks of training. This effect is reminiscent of escalation of drug intake and increased loading that are observed when rats have prolonged and/or repeated access to drugs of abuse26.

The results of these experiments also indicated that HFCS is reinforcing because of its caloric content. Even though 0.1% saccharin (a non-caloric sweetener)27 and 25% HFCS produce similar hedonic reactions (i.e. the perceived palatability of the two solutions is similar in tests of taste reactivity17), 0.1% saccharin could not maintain self-administration at the same level that 25% HFCS. Moreover, when substituted for HFCS, a wide range of saccharin concentrations (0.01%, 1.0%, and 10%) significantly reduced self-administration behaviour, indicating that HFCS reinforcement is largely determined by its caloric content rather than its palatability.

Taken together, these experiments indicate that intraoral infusion of HFCS reinforces lever-pressing in rats, and this behaviour was maintained primarily by the caloric content and not the palatability of the solution made available for self-administration.  In these rats, stable self-administration was maintained for up to three weeks, it was concentration-dependent, and rats developed a tendency to “binge” on HFCS at the start of sessions. Using intraoral self-administration, future studies should investigate the possibility that HFCS engenders other “addictive-like” behaviors, and whether escalation of HFCS self-administration can be causally linked to the development of metabolic changes (i.e., weight gain, insulin resistance) associated with obesity and type-2 diabetes.

19. Panksepp, J. & Trowill, J. A. Intraoral self injection: I. Effects of delay of reinforcement on resistance to extinction and implications for self-stimulation. Psychonomic Sciences 9 (7), 405-406 (1967)