A curious thing happened recently. The following picture of “animal testing” surfaced on Twitter and was retweeted over five thousand times (and counting) over the course of one week. 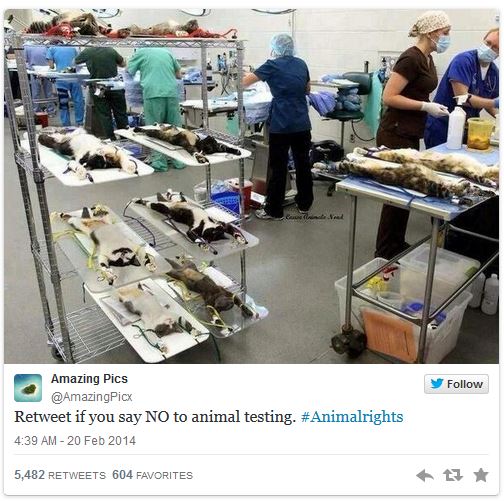 It runs with a message “Retweet if you say NO to animal testing. #Animalrights”. The message has been recurring on Twitter for some time, though its latest iteration has seen it tweeted thousands of times in just a few days. Many tweeters added their own messages of disgust. 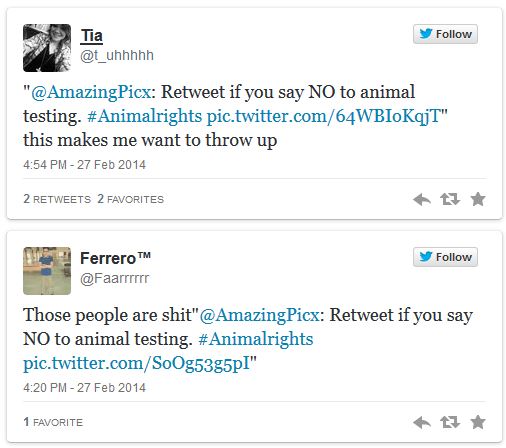 Unfortunately, for the thousands of people who retweeted it, this isn’t an example of “animal testing” at all. The picture originally appeared in an article by the Gainesville Sun – “Seized cats being readied for adopt-a-thon” with the caption “University of Florida vet school students and veterinarians work to spay and neuter cats as part of Operation Cat Nip on Wednesday.” 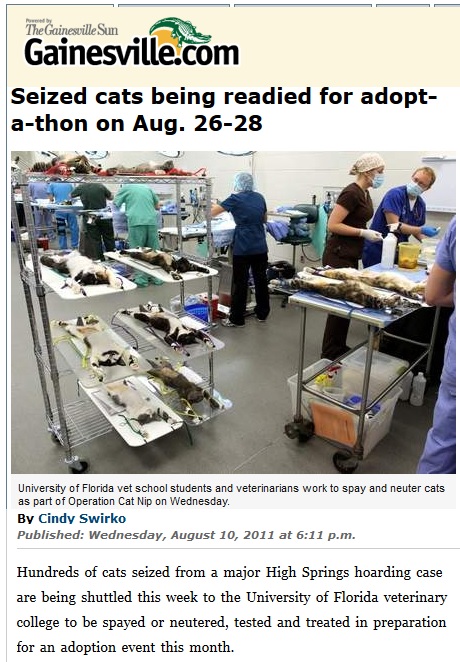 The story details how Alachua County Animal Services, along with US animal rescue groups, seized 697 cats on June 7 2011 from Haven Acres Cat Sanctuary in High Springs, Florida. Owners Steve and Pennie Lefkowitz described the sanctuary as a no-kill facility for unwanted felines. The Humane Society of the United States described it as the largest case of cat hoarding in the nation.

Several cats were sick with feline leukaemia and similar serious diseases and were put down. More than 300 needed to be spayed or neutered, and that is what is happening in this picture. The cats are under anaesthetic and are being operated on as quickly as possible in an emergency situation.

Why the picture, taken in 2011, has resurfaced, no-one knows. It is now watermarked with “Cause animal Nord”. In this picture’s travels across the internet it has been stripped of its original context and stamped with a new one. Somewhere along the line activists have decided this image could be recycled to misleadingly drive support for their cause.

Of course, this case of Telephone (Chinese Whispers) wouldn’t work without the thousands of internet users who have been duped into believing this lie. The irony is that animal lovers have been made to feel angry about an animal rescue, leading them to call for an end to the research that gave us the veterinary medicines the animals needed.

We have found that this story has been uncovered before.

The cats were seized on June 7, 2011 from Haven Acres Cat Sanctuary in Florida. The owners described the sanctuary as a no-kill facility for unwanted cats, but poor conditions led authorities to remove the cats and put them up for adoption.

Here is another picture of the surgery suite where you can see the clean and professional conditions which veterinarians are working in to spay and neuter these cats. 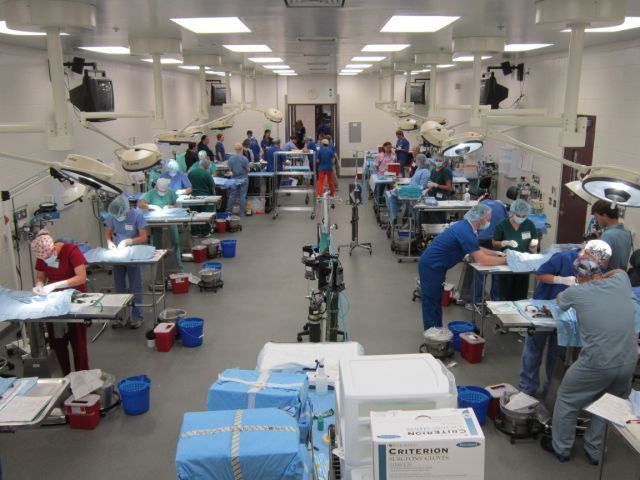 To learn more about the role of animal research in advancing human and veterinary medicine, and the threat posed to this progress by the animal rights lobby, follow us on Facebook at: https://www.facebook.com/SpeakingofResearch