A recent article in the Atlantic, “How Brain Scientists Forgot That Brains Have Owners” is making headlines. The journalist claims that in an article published in early February, titled “Neuroscience Needs Behavior: Correcting Reductionist Bias”, fancy new technologies have led the field of neuroscience astray. The original scientific publication does draw attention to an area of neuroscience that neglects behavior, and outlines the importance of measuring behavior and the brain. However, behavior is not necessary in all areas of neuroscience, and adding behavior to some neuroscience studies could be problematic. Furthermore, the overall goal of the scientific publication was only to suggest that the field of neuroscience is lacking in scientists interested in studying the whole brain rather than the just studying the sum of its parts.

The field of neuroscience is diverse. Take for example the 9 themes at the Society for Neuroscience Conference in 2016:

Although both publications neglected to discuss the diversity of neuroscience, the main theme of the scientific publication was to change the way scientists interested in the integration of physiology and behavior approach their research questions. Too many neuroscientists focus on using as many new technologies as possible, and then use behavior as an afterthought. The issue here is that some of these new technologies are not yet well understood. Thus, scientists’ research questions using these technologies could be misguided.

Furthermore, behavior is a separate area of research on its own and should never be treated as an afterthought. Thus, the authors suggest that neuroscience needs more interdisciplinary scientists who understand and study the relationships between brain and behavior. It needs scientists that can merge all areas of the field.

All neuroscientists however, no matter their specific question, will help advance the field in different ways. And all neuroscientists do not need to study behavior. However, Interdisciplinary scientists in particular may set the stage for understanding the whole animal and how the brain operates within it. Furthermore, these scientists may help increase the translation of research from animal to human.

The problem of neuroscience without interdisciplinary scientists

A possible issue with scientists only studying one part of the animal (i.e. the brain) is that they neglect the rest of the animal. The authors suggest many neuroscientists only interested in the brain use a top-down approach (brain-behavior) to infer how behavior operates — and this is problematic. A recent experiment on understanding a simple computer demonstrates the potential flaws in a top-down approach. Briefly, computer scientists tested whether the processes of three classic videogames could be inferred by only studying the microprocessor that operated the videogames. In contrast to the brain, the scientists already understood how this computer system operates. After much investigation of the hardware of the microprocessor and how it functions, it remained unclear how the processes in the videogames operated. Thus, by using a top-down approach to understand behavior we will not be able to understand the brain

The bigger problem with measuring the brain and inferring behavior without studying behavior is that you are only studying one part of the animal. Consider the blind men and the elephant: 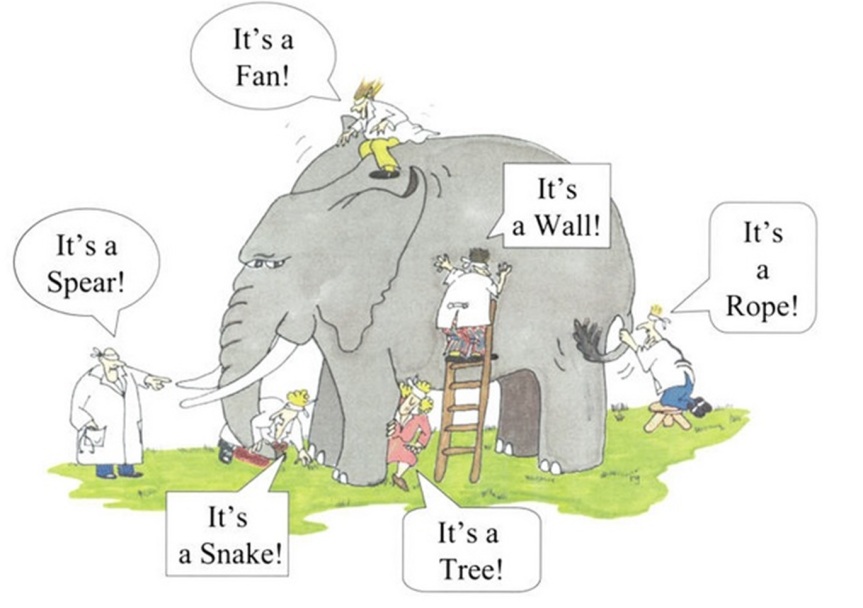 Quite simply, if I am blind-folded and given an elephant’s ear then I may think it is a fan. For me to understand and determine that I am holding an elephant’s ear, I would need to investigate the whole elephant — beyond a small part and beyond all parts individually. Interdisciplinary scientists study the “whole elephant.”

However, only studying the ear of an elephant isn’t completely problematic. I can measure what it is composed of, stick electrodes in it to see how it responds, pour different chemicals on it to see how it reacts, measure how it grows over time, test it in different scenarios etc. Thus, I can learn many different aspects about this so called fan. However, what I cannot do is infer its function or purpose without considering the whole elephant. Also, I may be unable to determine which findings are related to the potential functions, and which findings are not related to the potential functions.

The elephant and the blind men, also apply to all experiments using animal models for understanding human biology. If I do not investigate or consider the whole “elephant” I may never determine that the “ear” I am looking at has a similar function to “ears” in many other animals. More generally, if I only study neural circuitry in a mouse without considering the mouse as a whole (anatomy, organs, cells, behavior, environment, development, evolution, etc.) then it won’t help me determine how — or if – the neural circuitry may function similarly in the human.

Development is particularly important — and often forgotten — ­when studying the whole animal. You cannot just study the “ear” of the “elephant” at a specific time point in a specific environment because the structure or function may change over time. Consider the development of a frog:

In the tadpole stage the frog has a long tail for swimming and gills for breathing underwater. As it develops into an adult frog, however, the tail is reabsorbed and the frog exchanges its gills for lungs. Developmental context is necessary for understanding the whole animal.

The necessity of neuroscience with interdisciplinary scientists

Interdisciplinary scientists study both neural circuitry and behavior to understand the processes of the brain. However, this does not mean that they study parts of the brain, then study some behaviors, and understand the system. It also does not mean that they take a top-down approach (brain to behavior) or bottom-up approach (behavior to brain) — the choice here should depend on the specific research question. Interdisciplinary scientists study both brain and behavior at the same time. By studying both at the same time they can see how behavior emerges from neural circuitry and how neural circuitry emerges from behavior. The two are dependent on one another, they are not separate.

If I just look at the picture on the left, I might only see a chalice and begin describing all of its visual properties and then infer its function. However, if I look at the picture on the right then it might become apparent that the picture is both a chalice and two people looking at each other. If I have too narrow of a focus — only studying the chalice — then I completely miss understanding that this is an optical illusion. Understanding the whole is important, and one part is not the greater than the other.

However, as mentioned earlier when trying to identify the function of an elephant’s ear, if I do not have a starting point for inferring function or mechanism then I could be asking the wrong questions. This is the point that the authors in the original scientific publication also make. If you do not study the behavior of the animal or process that you are interested in, then you will be asking all the wrong questions concerning neural circuitry. One cannot understand the game of chess by just analyzing all the pieces and the board. You must first observe how the game is played, and then you can determine what makes the pieces and the board important.

This is example of watching chess being played first and then analyzing the pieces and the board, represents a top-down approach. However, as already mentioned, the approach you take is particular to the question you are interested in. Different approaches give you different answers. And in the unknown world of brain and behavior, we may really not know enough to properly infer how something functions.

Regardless, this example of chess also applies to all experiments using animal models. For example, I might have learned how to play chess on a large and heavy wooden board with specially molded iron pieces. And as long as I understand the rules and processes of chess, then I can play chess on any board — be it big or small, plastic or wood, physical or virtual. But if I spend all my time studying the chess pieces and never watching how the game is played, then it might be difficult for me to identify which chess piece does what on a different chess set. Just like it would be difficult for me to determine which brain areas of a mouse might be analogous to which brain areas in a human without measuring behavior. 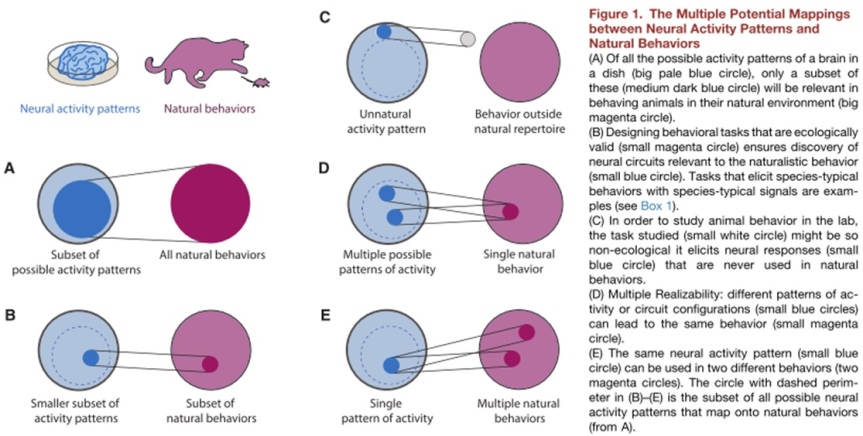 In conclusion, the neuroscientists who published the original scientific article are correct: behavior is necessary and you must study it if you want to understand the brain. However, all the fancy techniques neuroscientists have developed, independent of behavior, help us ask specific questions about neural circuitry and about behavior. Also, all scientists experimenting on animals —not just neuroscientists — should understand the arguments used in this paper and apply it to their own experiments. This will help us better understand how findings in one species might relate to findings in another, and thus help the translation of all science using animal models.

One thought on “Understanding the animal, not just its parts”