Pets directly benefit from animals in testing, research, and teaching veterinary medicine. In fact, pet medicine is big business, projected to reach $12 billion by 2022. In the US alone, 67% of households reportedly have pets. Data from the 2019-20 pet owners survey conducted by the American Pet Products Association indicated that 63.4 million U.S. households reported owning a dog and 42.7 million own a cat.

Public demand for veterinary services and medicines for their pets is reflected not only in the growth of expenditures, but also the size of the industries that work to develop, produce, and deliver medical care for pets. Among those are pharmaceutical companies and veterinary training programs, including programs to educate and train doctors of veterinary medicine (DVM) and veterinary technician programs.

Both companies and teaching programs use laboratory animals and much of this use is reflected in annual reports on the number of animals in research and testing, at least in the US. The reports for each institution can easily be retrieved here: https://aphis-efile.force.com/PublicSearchTool/s/annual-reports

How many animals are used in research and testing conducted by animal health companies?

The number and proportion of research animals used in development and safety testing for medicines and products made for nonhuman animal consumption, including for both pets and other animals, is highlighted by comparison of annual statistics that are publicly reported under many countries’ federal laws. In the US, for example, two large animal medicine producers, Zoetis LLC and Elanco used a similar number of animals for research as the top 50 NIH-funded universities in 2018 combined. The graph below shows the percentage of the U.S. total animals* in active research accounted for by Zoetis LLC and Elanco comprising roughly 8% of the total for the entire country (US total 2018; N=780,070). *The animals reported here are those covered by the U.S. Animal Welfare Act (AWA). As we’ve written before, mice and rats in publicly-funded research are covered by other federal law and do not appear in reports of AWA-covered species. (For detail see: https://speakingofresearch.com/2016/05/23/when-are-rats-mice-birds-and-fish-protected-by-us-federal-laws/) 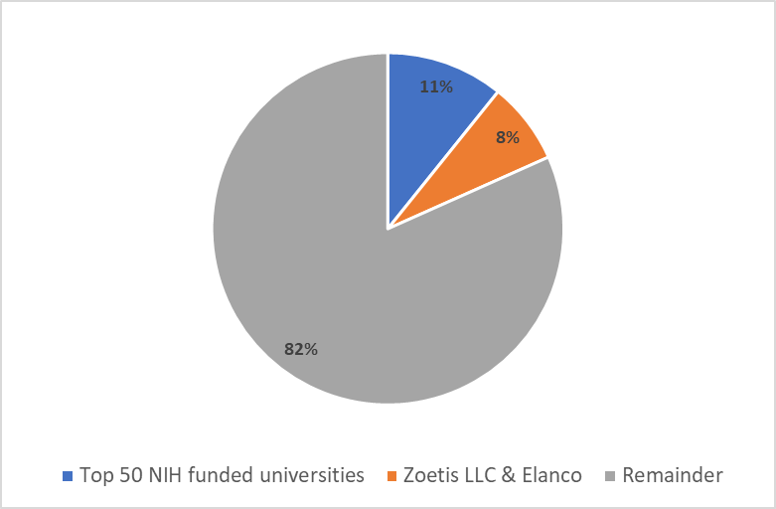 Beyond pets: Medicines and vaccines for Gombe chimpanzees, zoo apes, animals in agriculture

The role of nonhuman animal research and testing in benefiting other animals’ health and well-being extends far beyond production of medicines for pets. As we’ve written before, the health of animals in global agriculture benefits from veterinary medicines and treatment (read more here). Just one example is highlighted in the decades-long development of a rinderpest vaccine. As Dr. Paul Browne wrote at Speaking of Research in 2010:

In 1966 there was a polio outbreak among the chimpanzees at Gombe. What did Jane Goodall do?

Goodall’s decision was controversial, as noted by continuing discussion of whether, when, and how humans should interfere in the health of  free-living populations of animals. Science writer Ed Yong captured this dilemma in an article about development of Ebola vaccine for African apes. What is clear is that the polio vaccine was developed and tested through use of laboratory monkeys, mice, and rats. As a result, the Gombe chimpanzees’ vaccination administered by Goodall and her colleagues depended on animal research and testing: Some animals benefited from the use of other animals.

Speaking of Research, along with others, have previously called for drugs, vaccines, and medical devices to be properly labelled in a way that clearly indicates the role of animal research and testing in their development.

In 2012 we offered a proposal for the labeling of medicines, asking: “Shouldn’t the public be entitled to know where their medicines come from?” We called on pharmaceutical companies, scientific research institutions, medical charities, and federal agencies across the globe to advance policies and practices that will more clearly provide patients and consumers with the information that is needed to make decisions in accord with their beliefs. In the case of human health we have also called for transparency in decision-making with both individual citizens and policy bodies being informed about the full range of consequences of their decisions. If a country bans a particular type of research, for example, it is important to be aware of how that decision might affect future medical advances.

In the case of veterinary medicines for pets and other animals the same principles should be applied.