However, the public may not be getting enough information on how animal research is conducted and why it is important. Also scientists might not be sure if engagement improves public perception and may feel that they neither have the time or the training to effectively engage with the public about animal research.

Now thanks to a new study, there is greater evidence that scientific engagement improves the public’s perception of animal research.

The results of a study by Juan Carlos Mendez and colleagues have just been published in the journal Nature Neuroscience. This was a study on scientific public engagement conducted by a University of Oxford primate neuroscience and public engagement team.

Mendez and colleagues provide direct evidence that educational outreach about animal research can lead to a positive change in the public’s perception of animal research after engagement activities initiated by the scientists. For example, one of the questions from the study gauges the change in perception of animal research after the public engagement event led by the scientists. The results show 53% reported “Yes, positively”, with only 3% “Yes, negatively” (44% had “Unchanged” views).

The researchers conducted two public engagement events as part of public science festivals that took place in the UK and also online. These events were a part of the Oxford Science and Ideas Festival in 2020 and the British Neuroscience “Bring Your Own Brain” events in 2021, a part of the Festival of Neuroscience in the UK. During these events, the neuroscientists engaged with the public by showing the importance of work in primates for elucidating an important brain system that is compromised in patients with dementia and memory disorders.

First, they explained the regulatory and ethical approvals that must be obtained in order for work in primates to be allowed to commence and the regulatory oversight of the work once it begins. The group also showed how their work was conducted in the most humane way possible, by showing videos of the team members working with the monkeys. They then explained the research findings. The 40 minute presentation was recorded and made freely available online on YouTube (also see here). The online video has been viewed many thousands of times and nearly 100 individuals took part in the engagement activities and the pre- and post-survey. 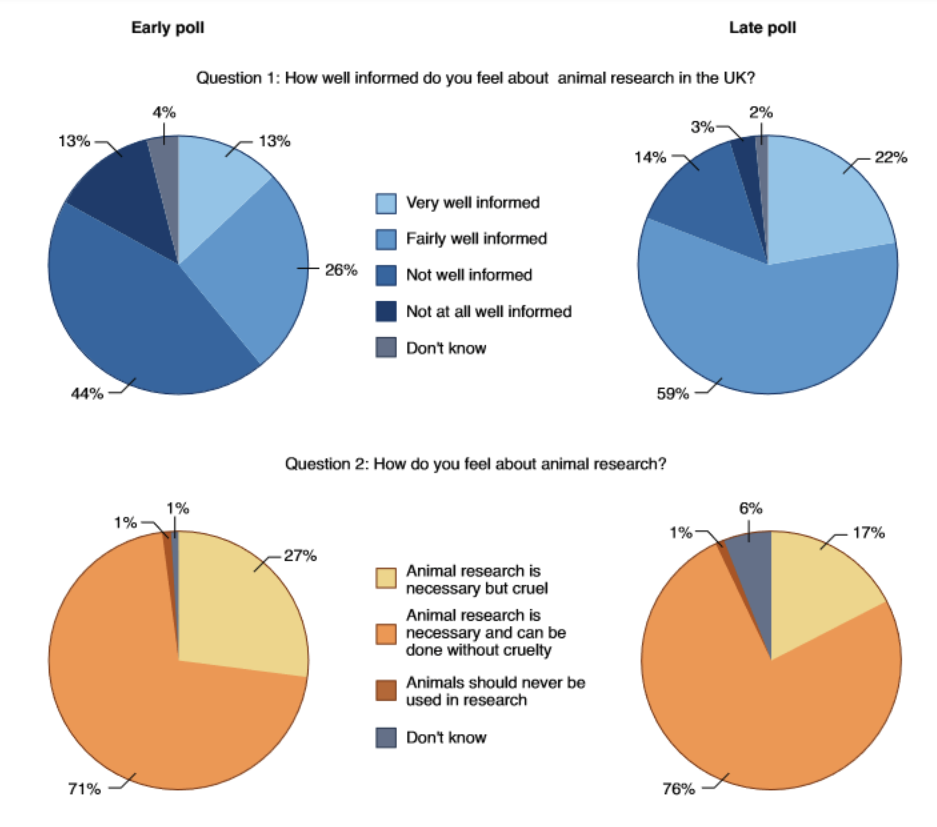 Source: Mendez et al. 2022. “Fig. 1 | Effects of science engagement on perspectives on animal research. Total per cent results of the online surveys completed before (early poll) and immediately after (late poll) our online science engagement event ‘Behind the Scenes of a non-human primate research lab’, attended by people over the age of 13 years from the IF Oxford Science and Ideas Festival 2020 and the British Neuroscience Association ‘Bring Your Own Brain’ 2021 Festival of Neuroscience.”

Their findings add to a growing body of evidence from outreach, educational and survey efforts that have been occurring over the past decades and are ongoing. For example, in a June 2021 guest post on Speaking of Research, the leaders of the Foundation for Biomedical Research compared the results of their public poll on animal research perception with that of a Gallup poll. They asked similarly structured questions, but posed in a more thoughtful way. They found that while the majority of those surveyed in both polls thought animal research was morally acceptable, asking the question more thoughtfully, as FBR did, appeared to lead to a more thoughtful response. Namely, the large middle, who thought animal research was morally unacceptable in the Gallup poll, was instead a large middle in the FBR poll of individuals who were undecided and appeared to need more information in order to know if animal research was morally unacceptable or acceptable.

We encourage all scientists to take an active part in public engagement activities to better inform the public. Take part in annual scientific festivals or those hosted in person or online by your institution. Organizations such as Understanding Animal Research and the Foundation for Biomedical Research can provide the needed guidance and training to make these events a success and enjoyable by everyone involved, the public and scientists alike.

Alongside engaging with the public, it is important to get and share your data to add to the growing evidence base. As the Mendez study shows, this can be conducted by taking pre- and post-event surveys of the public at the events. The surveys do not need to be extensive. They can include just a few questions, such as those that the Mendez study or the FBR poll used.

Animal research remains important, as does taking the time to engage with the public about it.