1964.  Lead scientist, Jerome P. Horwitz, working on new cancer treatments developed azidothymidine in 1964. Their work was funded by the National Cancer Institute (NCI, Grant #’s CY-5943 and CA-02903), one of the institutes within the publicly-funded US National Institutes of Health (NIH).

It turned out that azidothymidine was not promising for cancer treatment in humans, so it was shelved.1

1980s. About two decades later, as the AIDS epidemic swept the world, scientists and physicians worked to understand the disease and to find treatments, or even cures.2,3  The World Health Organization describes that early period: “… the HIV epidemic that raged through the world in the 1980s, killing thousands of people who may only have had a few weeks or months from diagnosis to death – if they even managed to be diagnosed before they died.”4

“In the 1980s, the average life expectancy following an AIDS diagnosis was approximately one year.1 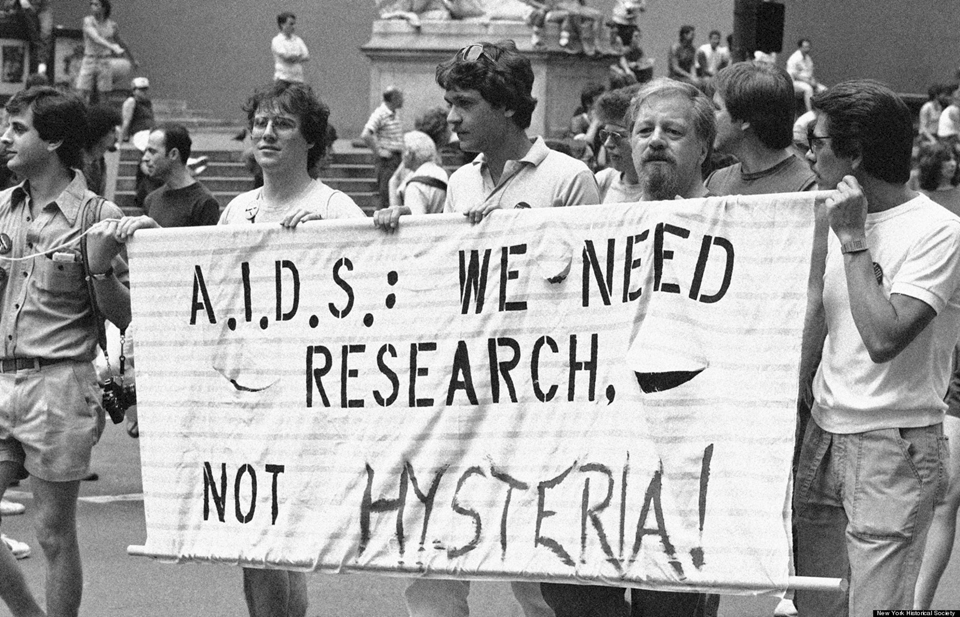 Azidothymidine, shelved in the 1960s as a failure, wasn’t forgotten. It remained in a database available to scientists. As a result, in the 1980s race for new treatments to treat HIV/AIDS, azidothymidine was retrieved as part of an NCI screening program. Because the scientists working to find new cures to cancer had already tested the drug in mice, information about the drug and its effects was already available. In turn, azidothymidine (commonly known as AZT) was identified as a potential match that could be effective as a treatment for HIV/AIDS.

In fact, in March 1987, AZT became the first drug to gain approval from the U.S. Food and Drug Administration for treating AIDS. AZT decreased deaths and opportunistic infections, albeit with serious adverse effects.2

Did AZT make a difference?

There is no question that AZT and the antiretroviral drugs that were subsequently developed extended the lives of millions of people. The graph above shows the number of AIDS-related deaths (in blue) across the 1980s and early 90s and the drop following availability of HAART (Highly Active Antiretroviral Treatment). The red line shows the increasing number of people living with HIV infection.3

AZT and HAART are not cures. The HIV epidemic is not over. According to the World Health Organization: “HIV is not an easy virus to defeat. Nearly a million people still die every year from the virus because they don’t know they have HIV and are not on treatment, or they start treatment late…In 2017, 1.8 million people were newly infected with HIV.”

However, for those who are living with HIV the treatments can be the difference between death and a near normal lifespan. In fact, use of HAART “has changed what was once a fatal diagnosis into a chronically managed disease.”5,6 At this point the major challenges remain – prevention (and the hope for a successful vaccine) and global inequity in access to treatments.3

Is animal testing a success or a failure? You decide

One of the common tactics used in anti-animal research campaigns is to claim that animal research and animal testing are failures. The claim often takes the form of “95% of drugs fail” or despite decades of study there is no cure for cancer, HIV, and other diseases. The failure claim has been debunked many times (e.g. here, here, here).

Was the 1964 study of azidothymidine a failure?

But was it worth it given it didn’t produce a cure? The answer to that depends on who you ask and is ultimately a moral and ethical question.

For some the answer will be no. But that is not because the cancer study failed. Rather, it is because any use of nonhuman animals by humans is considered wrong. Consider, for example, a quote attributed8 to the founder of PETA, Ingrid Newkirk:  “Even if animal experiments did result in a cure for AIDS, of which there is no chance, I’d be against it on moral grounds.” Newkirk is probably not alone. As we’ve written before, those opposed to the use of animals by humans–regardless of the purpose or benefit–would argue that advances in medicine do not justify the use of animals in research.

For others the answer will be yes. Imagine, for example, the answers of those who benefited from AZT and the drugs developed after it, or the answers their loved ones might give. For those who believe that humans suffering and at risk of death–whether from injury, chronic health conditions, or pandemics caused by viruses–deserve consideration, research, and testing to understand the health threat, develop treatments, and work towards a cure. In the case of AZT we could then ask if the benefit to humans with HIV/AIDS outweighs harm to mice used in early studies of the failed cancer drug. The question illustrates a fundamental principle that guides decisions about research and testing: Is the humane use of nonhuman animals balanced by the potential benefits of the research? And, as the AZT story illustrates, it is not always a straight line or short time between the research and the benefit.