Mixed news last week with the results of the latest Gallup Poll on the moral acceptability of medical testing. 2% more Americans believe that animal research is morally acceptable than in 2009 (with 2% fewer believing it is morally wrong). This is the second consecutive annual rise in support for this lifesaving medical technique.

However when we graph these numbers we can see that, although relatively stable over time, there has been a slight dip in support over the past decade. However, we must bear in mind that throughout this those who believe it is morally acceptable have held a 25% point lead. Overall these results should indicate that we still have much work to do to ensure that the public remains behind medical research. 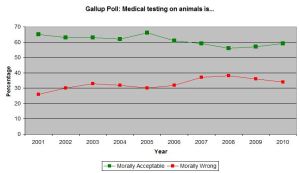 The final fact is that although 69% of men find animal research morally acceptable, only 49% of women do (although due to “no opinion/depends” this is still more than those women who believe it is unacceptable). To remedy this, proponents of research should make sure to mention the importance of animals in the development of the recent Breast Cancer drugs (Herceptin and Tamoxifen) and Cervical Cancer Vaccine (HPV Vaccine).

I also do wonder if the numbers would differ if the more accurate term “medical research” was used?