Over our history as an organization, we’ve read a lot of activist portrayals of health research and the people who undertake it. We’ve been called murders and torturers. We’ve had our heads super-imposed over bloody scenes and yes (unsurprisingly) we’ve even been compared to Nazis. See Godwin’s Law.

However, if you are a long-time reader of this Web site, you’ve come to realize something. Activist portrayals of science research are often science fiction. For example: Activist groups frequently send mass mailings to supporters about “infant monkeys torn from their mothers’ wombs.” Real world translation: The babies were born via cesarean section, just like 1/3 of the U.S. population.

Activist groups also frequently use “creative” language to portray researchers and research centers as shadowy and secretive. When groups have “unearthed documents that illustrate abuse,” they actually requested and obtained public documents. Then, used their anti-research point-of-view to translate the records into wild exaggerations that bear little resemblance to the facts they were handed in the first place.

As a public service, and a perhaps a method for bridging the communication gap between activists and scientists, we would like to propose “The Activist to English Dictionary.” 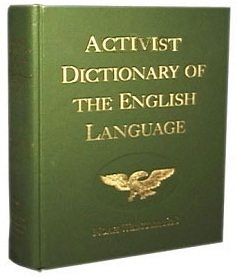 Try it out – go find some typical activist verbiage (you know where to find it!) …see if you can use the dictionary below – to decode it.

Also, all you aspiring “Websters” out there, we need your help. Please help us fill out the dictionary by adding your own definitions in our comments section:

Alternatives = Equality between two more more tools that have superficial resemblance. Activist public usage: “There are plenty of alternatives to animal studies” Activist private usage: “Well…actually there are a small number of alternatives but we better not tell the public that animal research is still required…because that would hurt our fundraising efforts.”

Animals are starved = Controlled access to food or water for animals.

Animals are poisoned = Animals are given medications prior to FDA approval to ensure they are safe for human consumption and to make sure we give people and other animals the right dose once it is made available.

Animals are sliced open/mutilated/cut up/dissected = Animals undergo a common blood test or undergo surgery that makes use of the same sterile conditions and pain medications as used on humans.

Cosmetic testing = cosmetic testing.  This should not be confused with health research aimed at ending suffering or preventing human or animal death.

Monkeys are forcefully restrained = Monkeys are trained to sit in a chair and receive treats as positive reinforcement.

Painful = Painful…if the animals are not given painkillers…but they actually are.

Vivisection = The use of the same methods used in human surgery in animals with the goal of advancing medical science and the well-being of humans and animals alike.