Overall, 96.5% of animals used in scientific studies were mice, rats, fish or birds. Cats, dogs and primates (which are offered special protections under UK law) together accounted for less than 0.2% of the total (similar to in previous years). The statistics also reveal that half of all experiments were the breeding of GM animals which were not used in further experiments. Overall, 2/3 of all experiments involved genetically modified animals. 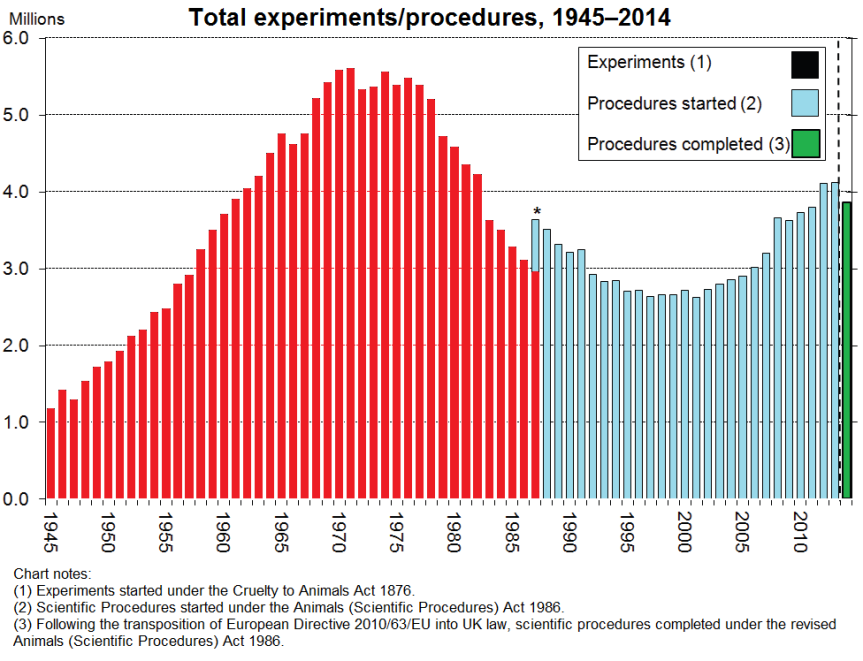 Last year’s plateau, and this year’s fall are likely to reflect the economic conditions for biomedical research (though the number of procedures is likely to lag R&D spending as research funding can last several years. Below we see the R&D expenditure of pharmaceutical companies in the UK over the last decade (note that this does not include R&D by universities, who conduct almost twice as much animal research in the UK as pharmaceutical companies). Spending slowed in 2012, which may be reflected in the animal numbers for 2014. 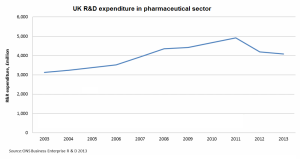 The fall in numbers may also be in influenced by further adoption of the 3Rs – Replacement, Refinement and Reduction. Home Office Minister, Lord Bates noted:

Today’s figures indicate the science community continues to respond to the Government’s firm commitment to adopting measures to replace, reduce and refine animal use.

A ban on cosmetic testing on animals (1998) and of using great apes (gorillas, orang-utans and chimpanzees) in research (1986) meant both had zero procedures in 2014. There were 138 household product tests, all on rainbow trout for EU regulatory purposes. This comes after 2 years where no such tests have been done – household product testing on animals will be banned in November 2015.

For the first time the UK statistics include retrospective reporting of suffering. Rather than just submitting licence proposals to the Home Office that include estimated levels of suffering, the researchers now have to report on what was actually seen (using a variety of measures). Unfortunately the statistics put these in two separate tables (Table 3 and 8). So we have combined them to get severity for all procedures in 2014. We can see most experiments are sub threshold (28%; less than the introduction of a hypodermic needle) or mild (50%), with remainder as moderate (14%), severe (5%) or non-recovery (3.5%; the animal never awakes from anaesthesia).

It is important to note that in line with new EU requirements, the UK now reports animals used in studies completed, not started in the given year. The statistical release says:

As a result, the 2014 data and comparisons with previous years’ data should be interpreted with some caution.

Speaking of Research congratulate the UK government on continuing to produce the most comprehensive statistics on animal experiments worldwide. It is also important to note that these statistics are released as a press conference each year where representatives from the scientific community speak about the importance of animals in research.

One thought on “Animal Experiments in the UK: Government releases 2014 statistics”