On July 4, 2016, at the 10th meeting of the Federation of European Neuroscience Societies (FENS), a Special Interest event took place focused on the critical need for communicating effectively to the public, to the scientific community, and to institutions about how and why researchers utilize animals in biomedical research. The lunchtime event was well-attended by conference attendees, who actively participated in engaging discussion and provided thoughtful questions throughout the session. 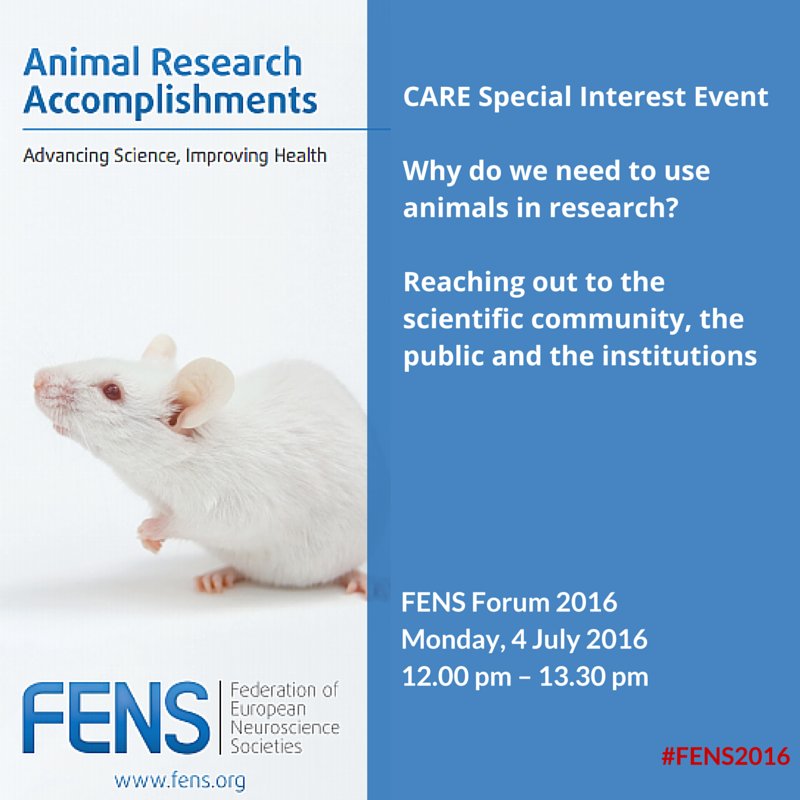 First to present was Francois Lachapelle, Chair of the FENS Committee on Animals in Research (CARE), which advises FENS on the responsible use of animals in neuroscience research. Lachapelle described CARE’s activities and goals to the attendees, which include supporting members and partners in emergency situations (such as attacks from animal rights activists), publishing statements on issues regarding critical situations in animal research (including the continued need for primates), and to develop a culture of proactive communication about animal research. CARE accomplishes this last goal through various videos, media statements, and public lectures and events. Lachapelle highlighted CARE’s active involvement in drafting a statement to the European Parliament in response to the European Citizens’ Initiative (ECI) “Stop Vivisection” movement in 2015.

Juan Lerma, Secretary General of FENS and ex-Director of the Instiuto de Neurosciencias CSIC-UMH in Spain, followed with a discussion of “Actions in Spain Supporting Animal Research.” Lerma promoted a message of transparency to improve the public’s awareness of the importance of animals in research, including providing resources in cities’ and countries’ local languages. Lerma discussed various tactics, from Spain’s active campaign against “Stop Vivisection” via the Confederacion de Sociedades Cientificas de Espana’s (COSCE) outreach efforts, to welcoming opportunities to engage with journalists and even children to teach about the value of animals in research.  Activities like Brain Awareness Week, highlighting an organization’s AAALAC accreditation, and organizing tours all go a long way to promoting openness and transparency. “We are proud of conducting animal research,” Lerma said. “Now it is time for transparency.”

Proud of conducting animals in research. Now it is time for transparency - @JuanLerma1 #fens2016 https://t.co/E5SwCF1uv0

An interesting Q & A followed Lerma’s presentation when a member of the audience asked how one can best convey that, while animal research is beneficial, it does not come without risk – in other words, that it sometimes fails? Lerma answered by stating that people with family members that have a particular disease will understand, and that it is important to also share the successes. Ultimately, Lerma acknowledged that it is more difficult to advocate for animal research without a translational component and that scientists and institutions must convince the public that it is useful. Kirk Leech, Executive Director of the European Animal Research Association (EARA), responded that an intellectual and moral argument for basic research for the sake of science itself is necessary. The conversation was also continued on Twitter:

If public doesn't embrace basic res., we must change their minds, not yield to the mistake or concoct justifications twitter.com/amanda_dettmer…

This stimulating debate was a good segue way into the next speaker, Dario Padovan. Padovan is President of Pro-TEST Italia, a non-profit that “aims to promote and disseminate to the public correct knowledge on scientific research.”  His presentation was less about communicating with the public about animal research and more about avoiding and preventing a crisis in the first place. After demonstrating the myriad ways in which scientists can and have been secretly video recorded by animal rights groups, Padovan continued with security tips to scientists such as restricting animal areas, having a no-cell-phone policy, having visitors wear hazmat suits (presumably to cover hidden camera lenses), and to beware creative editing by animal rights groups. Not only was this advice perceived by many to be in stark contrast to Lerma’s preceding presentation about openness in animal research, but also contrasted his presentation at the Society for Neuroscience’s 2015 meeting just 8 months prior when Padovan gave an inspiring presentation on how Pro-TEST Italia increased positive public perception of animal research in Italy. Padovan did end his talk with a few slides that held key guidelines for openness in animal research, which led nicely into the closing presentation, again by Lachapelle, who discussed general rules for talking with the public about animals in research. Of particular importance is the need for scientist to be proactive (rather than defensive) in their communications, to show their passion to the cause of science, and to emphasize the regulations in place that ensure animal welfare and ethical research.

Speaking of Research promotes openness whilst also respecting the importance of a safe working environment. Each institution must develop individualized strategies to accomplish this intersection within their unique environments. A recent successful example was the first national Biomedical Research Awareness Day, which multiple universities participated in this past May.

In all, the event by FENS served to energize scientists – particularly those in the “next generation” (i.e., trainees and young investigators) to be openly passionate and communicative about the important work they do to both save lives and to promote the study of science.