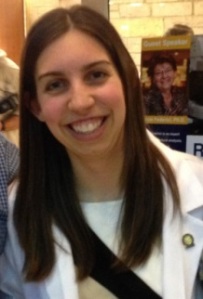 This guest post is written by Michelle Bedenbaugh, a Ph.D. student in the Physiology and Pharmacology Department at West Virginia University. It is part of our Speaking of Your Research series of posts where scientists discuss their own research. Michelle’s research involves examining the brain’s role in the initiation of puberty.  In this post, Michelle discusses the benefits of using large animal models to study reproduction.  If you would be willing to write a guest article for Speaking of Research, please contact us here.

With the increasing pressure to publish papers and the decreasing amount of funds made available to conduct experiments, it has become more difficult for researchers to survive and thrive in an academic setting (see here, here, and here). Scientists have had to adapt, and in many situations, this has led to a significant amount of research that relies heavily on small animal models, including rodents and invertebrates.  In addition to being less expensive than large animal models (sheep, pigs, cows, horses, etc.) there are also more genetic tools and techniques available to use in small animal models.  For example, transgenic mice, where certain genes can be either deleted or overexpressed, are used commonly by researchers worldwide.  Other cutting edge techniques, like optogenetics, where light can be used to control the activity of cells in the brain, are also being used on a more routine basis in rodent models and currently don’t exist in large animal models.

While it is most likely easier, cheaper, and faster to conduct experiments using small animal models, in certain situations they are not always the most comparable to humans.  When modeling certain diseases or understanding certain physiological processes, larger animals, like sheep, pigs, and cows, provide a better model for scientists.  This post aims to look at some areas where larger mammals can provide important knowledge or understanding.

A few of the more obvious benefits to using large animal models when compared to small animal models are that large animals are more analogous to humans in regards to body size, organ size, and lifespan.  In addition to these similarities, animals like sheep, cows, and pigs are much less inbred when compared to rodents.  Some would argue that it is advantageous to use animals that are highly inbred because this decreases the amount of variability in an experiment.  However, each human has a unique genetic makeup, and sometimes solutions for problems in inbred rodents cannot be translated for use in humans.  Therefore, in these instances, it is probably more beneficial to use a less inbred large animal model.  Most large animal models also have the added benefit of being an economically important species.  The majority of researchers who use large animal models are attempting to find solutions to health issues that are present in humans.  However, successful experiments in large animal models have the ability to affect both human and animal health.  For example, if a researcher made an important discovery about the way food intake is controlled in cows, it would have the possibility of improving human health, as well as increasing profitability for cattle producers.  Because cows are very similar to sheep, it may also benefit sheep production as well.  Rodents are not an economically important species that provides food, fiber, or other essential products used by the human population.  Consequently, discoveries made in rodents and other small animal models may only benefit humans if the results are translatable.

My particular research focuses on furthering our understanding of how puberty is initiated in girls, and we use sheep as our animal model.  I won’t get into the specific benefits of using sheep to conduct puberty research today because I will discuss this more in my next post.  However, I did want to touch briefly on some of the advantages of using large animals to perform research used to study reproduction in a broader sense.

The brain plays an essential role in controlling reproductive processes.  The brain structure of large animals is more closely related to humans than small animals because large species have a sulcated cortex (meaning the surface of the brain is wrinkly) as opposed to small animal species which have a smooth cortex.

Sheep also have the advantage of their brain and the cellular pathways present within it being similarly organized to what is observed in non-human primates.  Hormones serve a major role in relaying information from the brain to reproductive organs and vice versa.  The actions of several hormones that aid in controlling reproduction in female sheep (like estrogen and progesterone) parallel the actions of these hormones in humans.  Older sheep also have a similar response to estrogen replacement therapy when compared to post-menopausal women.  The development and function of several structures on the ovary of sheep is also similar to that which is observed in women.  These structures have a major influence on the reproductive cycle and are critical for the maturation of female gametes (sometimes referred to as eggs).  Assisted reproductive technologies, many of which are used for in vitro fertilization (IVF) protocols in women who are having trouble conceiving, have been adapted from procedures used in livestock species.  For example, artificial insemination, where semen is collected from a male and usually frozen so that it can be used to inseminate a female at a later time, is commonly used in cows, sheep, horses and pigs and is similar to procedures conducted in humans.

Embryo transfer, where embryos from one female are placed into the uterus of another female, are also used in livestock species and humans.  In addition, sheep are also an excellent animal model for studying pregnancy.  Sheep are used often to examine how stress, maternal nutrition, and exposure to excess hormones or toxins affect the development of a fetus.

These are just a few examples that display reproductive processes occurring in many large animal species are easily relatable to those same processes which also occur in humans.  I only touched on a few species today, but there are many more animal models that are underused in research and would serve as great models for humans.  In addition, I only discussed some of the ways these animals can be used to study reproduction when in fact they can be used to mimic many other biological processes that occur in humans.  Depending on the subject matter being researched, the use of some animal models is more appropriate than others.  Regardless of cost or time, researchers should always consider which animal model may be the most appropriate for their experiments.  I believe conducting research in a variety of species as opposed to just one or two species will always be more advantageous and will aid us in solving health issues in humans more quickly.