New statistics released by the Ministry for Health’s Council for Animal Experimentation showed that the number of animals used for research and testing on animals in 2017 was 1,238,178. This represents a 144% rise as compared to 2016. The rise is primarily due to a five-fold increase in fish used (they had previously risen fourteen-fold in 2016). 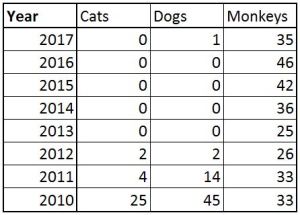 The reporting of severity showed that 8% of procedures involved no actual experiment, 18.9% involved no (or minimal) discomfort or stress, 29.1% involved little stress or short-term pain, 30.7% involved moderate pain alleviated through analgesics, and 13.3% caused considerable pain or suffering which could not be alleviated through pain relief (380 of the 439 severe studies were conducted on mice).

Approximately one-third of the applications were approved during the first round of hearings in the permit committees, and most of the requests were approved after two to six rounds of hearings in the permit committees after the researchers had to make changes. Eight percent of the research requests were rejected and/or the discussion was not completed. Before any permit is granted, requests are carefully examined and efforts are made to confirm the minimum number of animals that will provide a scientifically valid result for the research.

The last few years have seen large rises in the number of animal experiments carried out in Israel – particularly from 2016 to 2017 (+144%). This probably reflects the growing strength of the life sciences sector. Israel’s Life Sciences Industry IATI Report 2017 shows that Israeli life science companies raised almost $1.8bn in 2015 and 2016. Furthermore, OECD figures show Israel was the most research-intensive economy in 2015.

The huge rise in fish numbers may also be the result of just a few studies. So while the 276K mice were used in 2,743 studies (average of ~100 mice/study), there were 888K fish use in just 119 studies (average of 7,500 fish/study). More likely is that just one or two studies used a very large number of fish, and the rest used a moderate number. This was the case in Norway, where two fish projects accounted for over 10.5 million animals – 90% of the country’s total.

Other things of note from the annual statistics: