The European Union (EU) has released “statistics on the use of animals for scientific purposes by the Member States of the Union covering data from three years, 2015-2017”. Before we jump into our fact-based analysis of the new data we wanted to remind our readers of a few important facts pertaining to animal use statistics.

The collection of these kinds of statistical data are undoubtedly useful for some purposes but they also have major limitations with respect to informing meaningful and serious consideration of the ethical use of animals in research. As we’ve written before, simply reporting the numbers ignores the global context and relevant information about changes in animals used in research over time, thereby falling short of the overall goal. The question we should ask here is one of cost:benefit. What is the public benefit of this particular type of reporting? Does it provide a full picture of why animals are used, and how their welfare is ensured, why changes occur across years, or in different species, or in different countries? The answer here may well be no. At SR we believe that a key goal of transparency is to provide not only accurate information, but also the meaningful context that can inform serious consideration and decisions about global science, medical advances, and public benefit.

With these key points in mind, let us evaluate these newly released data.

Changes and expansion of reporting

Firstly, comparison of these data to the previously produced seven reports (1991-2011) is ill-advised because those reports were compiled under Directive 86/609/EEC, where there was little harmonization of guidelines between EU member states. Additionally, the number of member states in the EU has changed across the seven previous reports, ranging from 10-27, and so the comparison of these data in absolute terms is inaccurate/fallacious.

The main differences between the previous reporting guidelines and the current ones are:

“The data quality control revealed shortfalls but the overall assessment showed acceptable quality. Some elements of the new reporting have proven extremely demanding and required extensive efforts by Member States and the Commission. These concern especially the reporting of the severities experienced by animals and the consistency of reporting animal use for the maintenance of genetically altered animals within and between Member States, and over years.”

“General information is presented for the three years, 2015 – 2017. A more detailed analysis, however, uses the most recent and likely most accurate data of 2017.” emphasis added.

The EU also enumerated, for 2017, the total number of animals bred but not used in scientific procedures. This category includes:

“Animals that are bred, but not used in procedures cover all animals that for one reason or another were not used or were unsuitable for scientific purposes. These include also those bred and humanely killed for their organs and tissues, for example to be used in alternative (animal tissue based) methods. These numbers also include many breeding animals that arrived at the end of their breeding life. Finally, they include those that were intended for use, but for example, were ill and killed humanely before being used. Sometimes, animals may need to be killed on welfare grounds and in order to protect the health and scientific integrity of the colony.”

Thirty four categories of animal species were enumerated in this report—for full details of each category please see the original report. In 2017, the main species used for scientific purposes for the first time were comprised of mice, fish, rats and birds, which together represented 92% of all the animals used. Another major category, was represented by other mammals (7.3%) which was comprised of rabbits (3.7%), Guinea-Pigs (1.5%), Farm Animals (1.3%), Other Rodents (0.5%), and not other specified mammals and carnivores (0.3%). Dogs, Cats and Non-human primates, often given particular public consideration, comprised 0.3% of all animals newly used. 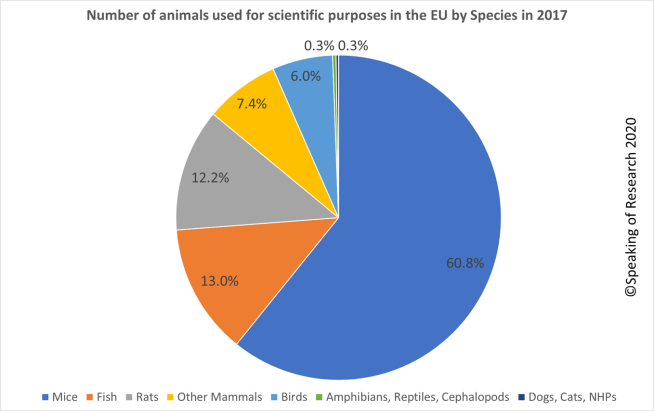 Severity ratings, which here refers to the experienced pain and/or “suffering” experienced by the animal, is described in the reference report with an important caveat:

“It is important to note that the reporting of actual severities is probably the most challenging element of the Directive to achieve consistent reporting within and between Member States as well as over time. Therefore, any firm conclusions on the results of these early years of reporting should be discouraged.” Emphasis added.

According to Directive 2010/63/EU, reuse of an animal is not allowed in a procedure classified prospectively as severe. However, in some cases, even if the procedure is prospectively classified in a lower severity category, an individual animal may reach severity category “severe” due to unforeseen events occurring during the procedure. Only a very small number of such cases (<1 %) were reported. Of the animals re-used, 74% were classified as mild, 19%  as moderate, 0.2% as severe and 6.3% as non-recovery.

There are much more data in this report—in total there are approximately 1000 pages of data and text available for download—including descriptions of the geographic source of animals used for scientific purposes in the EU. One explanation for the collection of these data in all animal species except non-human primates are the following reasons:

“The origin of animals is monitored as accommodation and care standards of the Directive only apply within EU. Moreover, an increase in transport times may impact negatively welfare.”

In contrast the rationale for collection of these data in non-human primates is stated as:

“In order to end the capturing of animals from the wild including for the purposes of breeding, the Directive requires moving towards using NHPs that have been bred, ultimately, in self-sustaining colonies, from parents who themselves have been bred in captivity.”

As we have written previously, we are overly cautious about the rationale for collection and interpretation of these data because the implicit assumption here seemingly relates to the perception the EU animal welfare standards are better than those of other countries—that assumption is without basis in fact.