A recent symposium at the joint meeting of The American Society of Primatologists and International Society of Primatologists focused on questions about the oversight and regulation of the housing, care, and treatment of nonhuman primates in research. Presentations of scientific research that primatologists conduct in order to inform animal care practices are a regular occurrence at ASP. This session, however, was billed as a call for dialogue. The organizers and participants included affiliates of groups and campaigns, including HSUS and PETA, that are often opposed to many types of primate research. ASP and ISP members conduct primate research in field, laboratory, zoo, and other settings across the world. The focus of this conference session appeared to be largely on laboratory  research, and particularly, that work funded by the US federal agency—the National Institutes of Health—that is charged with scientific research relevant to advancing public health.

Such research is a popular target for PETA and other groups opposed to the use of nonhuman animals in research, yet it remains a fact that the great majority of US facilities that house nonhuman primates are not dedicated research facilities (see graphic; summary illustration of data from USDA). As shown here, of the just over 1,000 US facilities that are either USDA-registered for research or USDA-licensed to house nonhuman primates for other purposes,  roughly 1/5th hold research registration. The majority are exhibitors. That includes zoos and other facilities that display animals to the public or engage in public interaction with the animals. In the US, the number of primates housed within each facility is reported annually for research institutions and is published by the USDA (for example, see here); however, the number of primates housed in licensed facilities is not easily accessible. This is similar to other countries.

We’ve written previously about the standards of care, external oversight, and public transparency of federally-funded research within dedicated research facilities in comparison to zoos, sanctuaries, breeders, dealers, and private owners of nonhuman primates (Bennett & Panicker, 2016). In fact, some of these comparisons are central to discussions in recent months about decisions to ensure the best outcomes and long-term care of retired chimpanzees (1, 2, 3, 4, 5).

The limited focus of the recent ASP/ISP conference session to nonhuman primates used in research in the US (18% of facilities) could have many explanations. We will return to consideration of these points, and to a fuller discussion of the session, in subsequent posts. To begin, however, we return to excerpts from a post we made in 2013, with points that are foundational and key to a fair dialogue.

Fair partners in dialogue: Starting assumptions matter and they should be spelled out

The importance and need for civil, open dialogue about the complex set of issues involved in use of animals is among the points of agreement between members of the scientific community, the public, animal rights activists, and others. Speaking of Research, along with others, has consistently advocated for and engaged in such dialogue via a number of venues, including our blog, public events, conference presentations, and articles.

One of the important purposes of dialogue is to communicate diverse viewpoints and values on animal research and one key to understanding those viewpoints and values is consideration of the basic starting assumptions, or positions, from which they arise. However, such dialogue often takes place without clear specification of the starting positions held by the people engaged in the conversation. Speaking of Research has previously highlighted the problem with this approach– for example, see Prof. Dario Ringach’s posts on a series of public forums on ethics and animal research (here, here, here).

The basic position of those engaged in animal research is obvious in part by the nature of their work. Furthermore, the very structure of the current regulations and practices reflect– both implicitly and explicitly – a set of positions on the ethical and moral considerations relevant to the use of animals in research (*see below).

What are the positions of those who oppose laboratory animal research?

In some cases, these are clearly stated. In the case of absolutists, the position is that no matter what potential benefit the work may result in, no use of animals is morally justified. This extends across all animals – from fruit-fly to primate. Furthermore, all uses of animals, regardless of whether there are alternatives and regardless of the need, are treated identically. In other words, the use of a mouse in research aimed at new discoveries to treat childhood disease is considered morally equivalent to the use of a cow to produce hamburger, the use of an elephant in a circus, or a mink for a fur coat.

In this framework, the focus often excludes consideration of the harms that would accrue as a consequence of enacting the animal rights agenda. For example, the harm to both humans and other animals of foregoing research or intervening on behalf of animals. As a result, while the absolutist position is often represented as one that involves only benefits and no harms, this is a false representation. While some animal rights groups are clear about their absolutist position, others—to our knowledge—are not.

On the other hand are those who avoid identifying directly with an absolutist position, but instead focus on the need for development of alternatives to use of animals in invasive research. This is a goal that may be widely desired and shared. It does not, however, address the question of what should be done in absence of alternatives and in light of current needs that can only be addressed by animal studies. In turn then, this position is silent with respect to moral and ethical consideration of a broad swath of research and fails to offer a framework to guide current actions.

We believe that the goal of promoting better dialogue would be assisted by making these positions clear and we provide a starting place below. We welcome additions by individuals and groups, as well as clarification or correction if any are unintentionally misrepresented. (For additional groups see original post).

People for the Ethical Treatment of Animals: Offers clear statement of absolutist position. “PETA has always been known for uncompromising, unwavering views on animal rights. PETA was founded in 1980 and is dedicated to establishing and defending the rights of all animals. PETA operates under the simple principle that animals are not ours to eat, wear, experiment on, or use for entertainment.”

New England Anti-Vivisection Society: Offers clear statement of absolutist position. “Is NEAVS against all animal experiments? Yes. For ethical, economic and scientific reasons, NEAVS is unequivocally opposed to all experiments on animals and works to replace them with humane and scientifically superior alternatives that are more relevant and predictive for humans.”

Humane Society of the United States (HSUS): Does not, to our knowledge, offer a clear position on whether it is morally acceptable to use animals in research when there is no alternative. What they do say: “As do most scientists, The HSUS advocates an end to the use of animals in research and testing that is harmful to the animals. Accordingly, we strive to decrease and eventually eliminate harm to animals used for these purposes.”

How is this relevant to building productive dialogue?

For those engaged in dialogue about the ethical and moral considerations related to the use of non-human animals in research, even this brief list makes clear that it is important to ask participants to begin by putting their basic starting assumption forward. Why? For one reason, because those assumptions are key to identifying whether there are potential areas of agreement or none at all.

For example, discussing refinement of laboratory animal care with an absolutist—someone fundamentally opposed to animals in laboratories—misses the point. No amount of refinement would make the work acceptable to them. In this case, the more critical questions for discussion would include consideration of the relative risks and potential benefits of failing to perform research for which there are currently no alternatives to animal-based studies. Consideration of species’ capacities and criteria for differential status– if any– would also be a useful starting point. 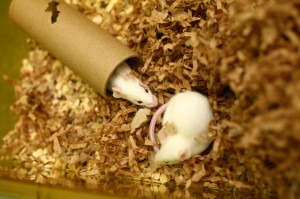 What about dialogue with those individuals and groups who do not provide a clear position? Does it matter?

Some would argue that it does not because the dialogue is only concerned with animal welfare and with reducing harm to nonhuman animals, or with pushing forward to develop non-animal alternatives for some types of research. In fact, framed in this way, most scientists are not only in the same camp, but are also the people who work actively to produce evidence-based improvements in welfare and development of successful alternatives.

The problem, however, is that real-time, critical decision-making about human use of other animals in research is not simple. It does require serious, fact-based consideration of the full range of risks and potential benefits, including consideration of the health and well-being of both human and nonhuman animals. It also requires clarity about alternatives, where they exist and where they do not. And it requires some understanding of the time-scales in which knowledge unfolds – often decades – and a basic appreciation for the scientific process.

It is easy to argue that developing non-animal alternatives for invasive research should be prioritized. But this argument does little to address the question of what to do now, what we do in absence of these alternatives, and what choices we should make as a society. Those questions are at the center of dialogue and the core issues with which the scientific community and others wrestle. To address them productively, and in a way that considers the public interest in both the harms and benefits of research, requires articulation of starting assumptions and foundational views.

Excerpted from previous post “Fair partners in dialogue: Starting assumptions matter and they should be spelled out” 6/12/13

*For example, in the U.S., the laws and regulations that govern animal research mandate that proposals for use of vertebrate animals (including rats, mice, birds) provide, among other things: 1) a justification of the potential benefits of the work; 2) an identification of potential harms and means to reduce them; 3) evidence that alternatives to using animals are unavailable; 4) the use of the least “complex” species necessary to answer that question; and 5) much detail about the animals’ care and treatment, including the qualifications and training of the personnel involved. Consideration of these issues occurs not only at the stage of IACUC evaluation, but throughout the scientists’ selection of questions and studies to pursue, peer review and selection of projects for funding (more here). Furthermore, the entirety of the project must proceed in compliance with a thorough set of regulations designed on the basis of the 3Rs – reduce, replace, and refine (for more about regulation see here, more about 3Rs, here).

In other words, while there is always room for continued improvement, the structure is designed to require that the major ethical and moral considerations relevant to animal research be addressed by those involved in performing and overseeing the work. This structure also incorporates explicit consideration of changes that arise from new knowledge. That includes evolving knowledge about different species’ capacities and needs, as well as the development of alternatives to animal-based studies for particular uses. It also includes advances in our scientific understanding that demonstrate the greater need for basic research that requires use of animals to address key questions.