Vegans are often defined as anyone who does not eat any food derived from animals and does not use any animal products. This means that they are also often opposed to the use of animals for research and testing of medicines, vaccines, and medical devices. But, how do they respond when a raging pandemic is addressed by development and delivery of lifesaving vaccines?

Questions for vegans and those opposed to animal research/testing

For vegans and others opposed to the use of animals by humans, including use of animals in research and testing, there are a number of questions to address. Among them: 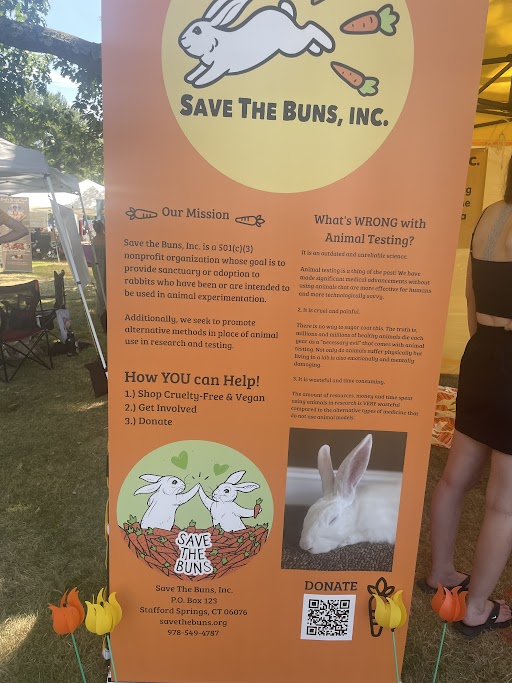 At an organizational level, transparency and approach to moral consistency vary. Some organizations encourage vaccination while remaining silent on the role of animal research and testing in producing both the necessary foundational scientific knowledge and essential elements of vaccine development and testing. Some remain silent on the topic of vaccines.

For example, a recent display by a group called “Save the Buns, Inc.” at a Vegan & Vegetarian Festival called “Compassionfest” in Connecticut advertises against animal testing, declaring that it is “a thing of the past.” What isn’t often seen in such displays, and leaves the passersby to wonder, is whether those opposing animal research have hypocritically taken a vaccine in the past year and why that too isn’t advertised.

“If we were to refuse medical treatment for ethical reasons, it could lead to a decline in our health—and our ability to speak up for animals in the future might be limited.

Unfortunately, it’s too late for us to help the animals who were subjected to painful experiments for the COVID-19 vaccine. However, we can use our voices and take actions to spare other animals this fate.” 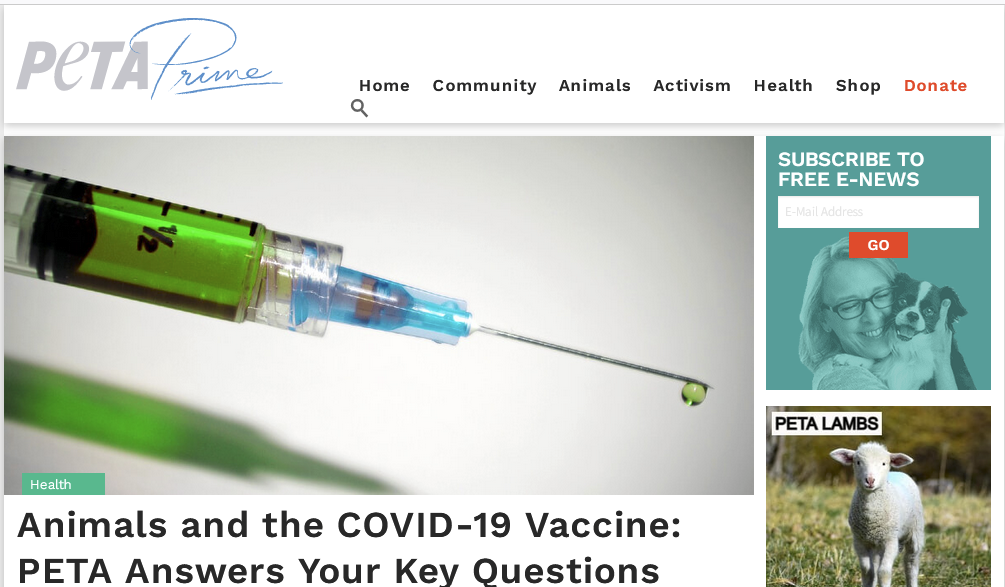 To recap: PETA recommends that people are vaccinated with vaccines that stemmed from animal research–research that they oppose–with the rationale that PETA-inspired people should increase their survival rates in order to protest against animal research that continues to improve those vaccines, better prepares us for future strains, and advances medical science to save lives. Or, put another way:

What does Peter Singer have to say about animal research in a pandemic?

We’ve written about this topic a number of times. Psychologist blogger Hal Herzog covered the topic recently in a Psychology Today post titled “Vaccinations, Vegans, and the Problem of Moral Consistency.” Herzog’s post outlines the fundamental conflict between opposing the use of nonhuman animals in research and benefiting from the use when one’s health and safety are jeopardized. Using the COVID-19 pandemic and vaccine development as the example, Herzog describes a problem that isn’t novel, but is certainly salient and the subject of many current commentaries and organizational position statements.

Herzog reached out to Peter Singer, a utilitarian philosopher famous for his 1975 book titled “Animal Liberation” for his view. Herzog reports that Singer emailed:

‘The use of animals in research is justifiable when the benefits are clearly outweighed by the costs—where the interests of all sentient beings are given equal consideration, and the benefits are discounted against the research project achieving those benefits.’”

Herzog also reached out to bioethicist Dr. David DeGrazia. Herzog notes that, although DeGrazia “opposes painful animal research” the bioethicist made the exception of a “raging pandemic.” DeGrazia told Herzog:

“‘The current pandemic is certainly the type of situation in which exceptions might be justified.’ Further, he said that a better case can be made for studies using monkeys rather than mice because rodent research rarely leads to treatments for human disorders.”

Before turning to the central problem in both Singer and DeGrazia’s statements, it is worthwhile to note a bit of misinformation in the latter’s comment. DeGrazia justifies monkey research over rodent research because– in his view– rodent research rarely leads to treatments for human disorders. The statement is surprisingly naive, at best. At worst, it is intentional misrepresentation, or a contortion meant to substantiate an anti-animal research position. Rodent research often precedes monkey research, and rodents served a crucial role in the development of mRNA vaccine technology. In fact rodent research in the early 1990s provided the evidence that mRNA vaccine technology worked and should be tested in monkeys (see mRNA history).

As we’ve written previously, and Herzog writes here, the pandemic and vaccines have illustrated the tragic costs of moral consistency. Many open questions remain, however, and the answer to them–or at least a willingness to engage in substantive, honest, and transparent consideration–is key. While Singer, DeGrazia, along with PETA and others have shared their views of benefiting from a vaccine produced through animal research and testing, they fail to tackle the much larger question. How does a singular post hoc justification for animal research and testing in the case of the COVID-19 pandemic inform ongoing consideration of animal studies?

We call on Singer and DeGrazia, along with Herzog, to elaborate on their positions. Can they go beyond noting the problem of moral inconsistency or commentary on this singular issue and instead interrogate what the singular issue illustrates for consideration of animal research and testing now and in the future? Any of us can comment on what is already known. For scientists and broad society, however, decisions have consequences for the future and failing to decide, failing to act, failing to conduct research can all result in harm (i.e., the harm of inaction).

We also ask:  How will those lobbying for an end to animal research and testing–regardless of the harm that results–fairly and honestly convey the consistency issue in their ongoing campaigns? And how will those who understand the issue and its consequences hold them accountable?

We hope others follow suit in serious consideration of moral consistency and conversations about how the COVID-19 pandemic and development of vaccines underscore the consequences of denying the benefits of animal research and testing. We encourage everyone to ask those lobbying for an end to animal research for their own views on taking and benefiting from the COVID vaccines while simultaneously continuing to pretend that animal research is useless and should end.

The question of whether, and when, opponents of animal research should refuse medical treatments that arise from animal research and testing is not a new one. A 2011 post here at Speaking of Research asks the same, concluding that:

“Ethical principles are supposed to guide one’s moral judgements.  If you have strong moral principles you want to impart on the rest of society, you better be the first to be prepared to accept the consequences of such principles.”

As we’ve written previously, clear medication labels would also help with decision-making and avoiding hypocrisy (or admitting to it).

Labeling drugs, vaccines, and medical devices with accurate information about the role nonhuman animal studies and testing played in the beneficial medicine or vaccine would allow people to choose to live their beliefs, or, perhaps, identify when their choices are hypocritical.