Well we’ve covered video coverage and print coverage of the Pro-Test rally, now onto the blogs.

Before we get too deep into the UCLA Pro-Test coverage, many of the blogs, including the highly-read Pharyngula blog, have talked about the poll attached to the LA Times article. The poll has (somewhat suspiciously for both sides) attracted over 150,000 votes, with the Pro-Testers currently leading this simplistic dichotomy (see Adventure in Ethics and Science blog on this) by around 60%.  So in the words of PZ Myers “please, go forth and destroy this pointless metric”.

Respectful Insolence wrote a piece reviewing the various media coverage as well as offering his own thoughts:

For too long, animal rights extremists have had the public relations stage virtually to themselves, and this Pro-Test Rally was an excellent demonstration of what scientists can do when they refuse to be cowed. Remember, this is about animal welfare, but not animal rights. Animal welfare. Scientists are very much concerned with animal welfare, and animal research is a highly regulated endeavor. 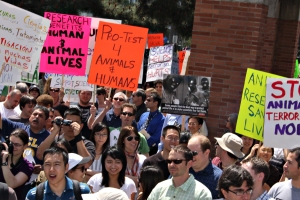 Science Journal’s blog (which we mentioned before but was so good I’m mentioning it again) gave some of the best coverage of the issue:

The organizers of today’s Pro-Test rally at the University of California, Los Angeles, say it succeeded beyond their hopes. Hundreds of people—many of them students and postdocs—came out to show their support for biomedical research.

The Pharyngula blog announced “I am Pro-Test”. Drug Monkey mentioned some video coverage among his two posts on the issue, and Neurotopia v. 2.0 showed their excitment about the rally.

So that’s the coverage all wrapped up, if you know of any more leave a comment.